COVER token to re-enter into to the yPIE

great, I always believe that COVER is a good project

I’m for it. Wouldn’t be a Yearn Ecosystem Pie without Cover.

Full support for this.

YPIE should provide complete Yearn Finance Ecosystem exposure and Cover is playing a crucial role in that ecosystem.

The incident was unfortunate but was not connected with the coverage mechanism and has since been rectified with the removal of staking.

I believe we should move this to a snapshot in the near future.

We need to decide where we get the required liquidity from.
Possibly the Cover treasury could provide the COVER and get freshly minted YPIE in return proportional to the value of the COVER deposited.

Hey @teddy9423, thanks for bringing this up. I moved the topic to the #rebalancing-ideas section while waiting for the appropriate model to be provided.

More info: How To Prioritise PIPs & Guidelines For Good Interactions in the Forum

By required liquidity do you mean, add cover from the start to balance it with the rest of the pie?

That is an interesting idea.

How much cover is needed and what would the % be of the pie?

Sure, thanks. Lets talk it out before!

Additionally to the proposal to add back $COVER to the $YPIE, it would seem appropriate to also include $BADGER in light of the partnership recently announced with the Yearn Ecosystem.

Both additions could coincide with the first rebalancing event of $YPIE which could be scheduled, pending governance vote, keeping as reference one of the optional allocations analysed further below, though the application of the methodology more extensively covered here.

For reference here’s the current $YPIE allocation, with a clear over-exposure of SUSHI resulting from the impressive growth scored by the project over the past months. 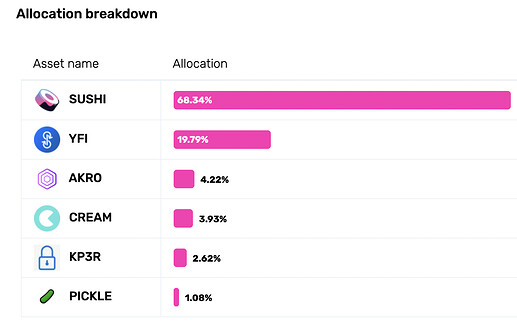 OPTION 1 - 40% cap
The first proposal would keep a 40% max allocation (cap) as per original design of the $YPIE. 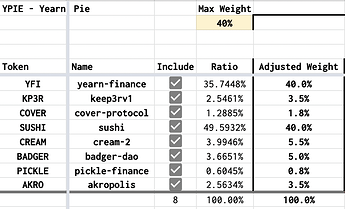 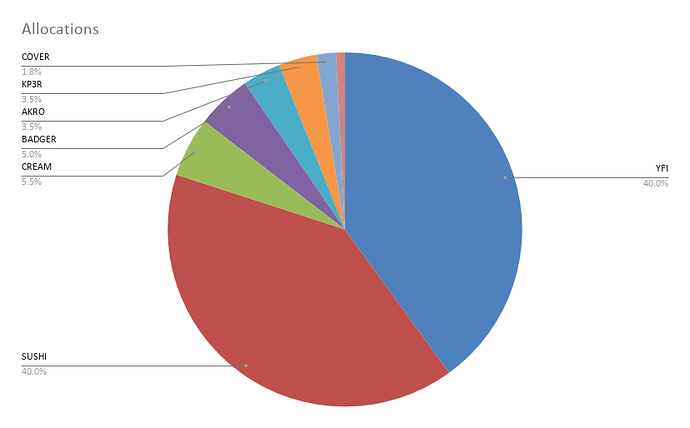 Main reason to set a high cap is to provide scalability also for higher liquidity levels, in a way that the small caps included won’t represent a bottleneck.

An extended risk analysis and backtesting performed on the period Jan 18th - Feb 16th (30 days) still shows how the majority of assets present a very-low to low cross-correlation, while only few pairs score mid-to-high correlation, such as SUSHI/YFI, SUSHI/CREAM & KP3R/YFI, denoting an interesting level on un-correlation among the underlying assets represented in $YPIE.

On the other hand, most assets scored a sensibly high standard deviation, with YFI and KP3R scoring the lowest among peers, indicating a contained price variance.

As per the Marginal Contribution to Risk, some concentrations can obviously be found around SUSHI (50.9% MCTR vs a 40% allocation), given the high % allocation and the consistent returns scored over the period under scope.

Backtesting this proposed allocation we can assess that $YPIE would have returned 97.35% over the past 30 days, somehow out-performing the excellent 84% returned by the actual $YPIE over the same period

OPTION 2 - 35% cap
This second proposal would impose a 35% max allocation (cap), reduced from the original 40%.
This reduced cap would translate in a slightly higher allocation for the minor caps, with potential upside for the Pie as a whole given the current bullish market cycle. 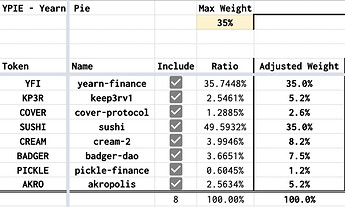 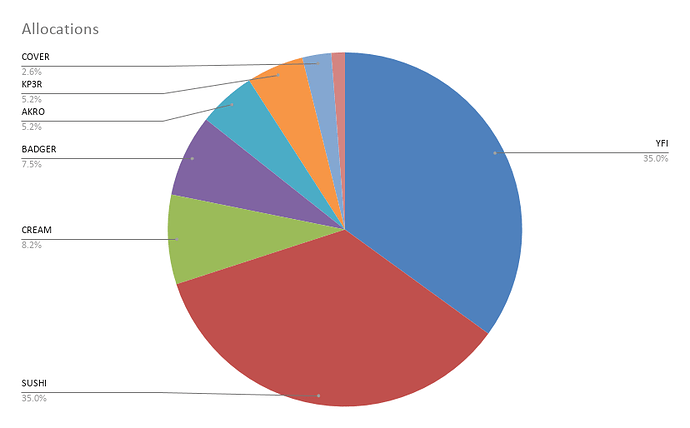 The increased allocation of smaller Market Caps would anyhow not affect the scalability stress-test performed over increasing liquidity volumes.

Performing a risk analysis for this second allocation over the same 30 days period (Jan 18th - Feb 16th), we can see how this allocation would improve the resulting Marginal Contribution to Risk, specifically reducing the MCTR of SUSHI to approx 45%.

Furthermore, from the backtest we can reconstruct how this second $YPIE allocation would have returned an excess of 106% over 30 days, with 2.5 Sharpe Ratio, well outperforming both the previous option and actual return scored by $YPIE (approx 84%) over the same period.

Full analysis can be found here.

I would personally recommend this second option, for the reasons just introduced.
Furthermore, it’s here important to stress how the PieVault design won’t continuously rebalance as other Pies based on Smart Pools, so the upside deriving from any project growth would be progressively locked in the Pie, increasing its relative allocation over time.

Wow, this is such a great analysis and breakout. I would love for either option but option 2 looks primed!

Very nice article.
I like the 35% cap idea with the additions.

I agree we should also include Badger to keep complete ecosystem exposure.

Option 2 would be my preference.

I am inclined to keep the 40% mcap originally identified, and would stick to option 1. However, the token addition portion of this proposal is my priority.

Option 2 has my vote

New snapshot vote is up https://snapshot.page/#/piedao/proposal/QmR4vBGXudjBzMdKZqJLKKS9qtfba79BmMt1HyQaCj2d9G

Are you a $COVER Holder? Support the Snapshot proposal to Use treasury COVER to re-join YPIE! https://twitter.com/CoverProtocol/status/1364992768381231109

The Cover Protocol vote passed with 100% support, so we will soon be able to rebalance and welcome them back to YPIE.