The following post comes as a follow up to the recently passed Doughpamine termination proposal. Meaning incentives on every Dough pair and on BCP have been terminated on the 27th of October.

By terminating Doughpamine, the DAO is effectively interrupting its liquidity renting strategy. As a result, a number of LPs which have been farming Dough may now consider to exit their LP positions and potentially sell its Dough side. This posts outlines the Buyback program designed for LP and eDough holders exit.

One of the main reasons why the Doughpamine program was terminated was to avoid further selling pressure induced by LPs dumping rewards. As LPs now look at potentially unwinding their positions, they could potentially cause the very selling pressure the team has been trying to avoid through the proposal.

Moreover, as LPs exit and unwind, dumping would occur on an increasingly illiquid market which would exacerbate price decline. This would thus result in a lose-lose situation for LPs and the DAO as the former will incur both lower selling price and higher slippage, while the latter would have failed in its attempt to mitigate selling pressure.

In order to prevent the eventuality outlined above, it’s proposed to run a buyback program for LPs and for all floating Dough held by the market, to also represent an alternative for holders willing to opt-out from the proposed migration to Auxo. In this way, holders who wish to sell their Dough can do so through an OTC deal directly with the DAO treasury. This solution therefore aims at protecting Dough from the negative price impact that would be induced by heavy market selling. In addition, this would allow holders to sell while avoiding price slippage.

There will be 9 buyback epochs, lasting 2 weeks each. Each epoch will have an increasing discount applied on the buyback price. The buyback price will be fixed at the 30-day TWAP (daily opening price, Coingecko source), calculated at the day preceding the start of each epoch, plus the discount relative to the specific epoch. Discounts per epoch and epoch calendar periods are summarized in the table below. 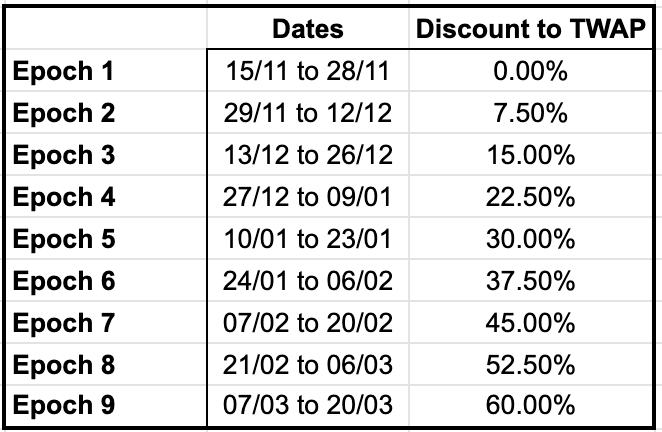 This part of the buyback program is intended for eDough farmed by LPs which may not be able to vest before the protocol migration to Auxo or anyhow provide an exit solution for LPs that may prefer a short-cut alternative to the vesting of their eDough reward. Buybacks will follow the very same epoch distribution as for liquid Dough. However, the buyback price will be fixed per epoch and not dependant on market price, considering that eDoughs have no market/price set until vesting. The table below displays buyback price per epoch. 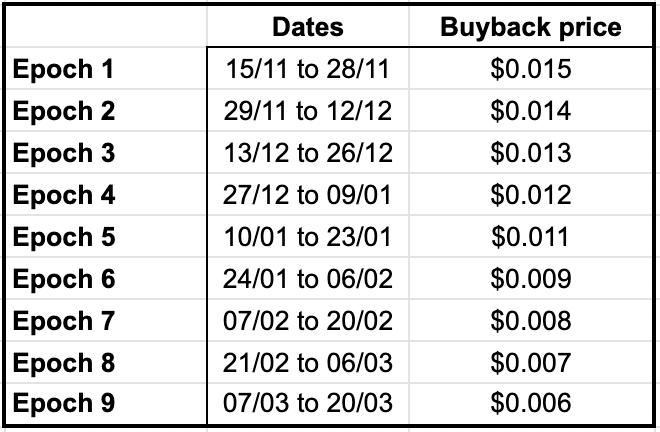 The proposed budget to be allocated to this buyback initiative is intended to be deployed in the buybacks contracts on an epoch-by-epoch basis, with residual balance from the previous epoch rolled over, to constitute the new epoch’s budget together with any required amount top-ups. 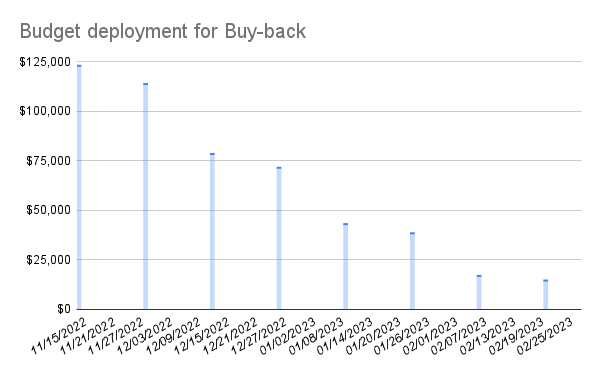 Holders that wish to opt for the buyback program will be able to do so through the PieDAO website interacting directly with the buyback contract.
The website’s UI will be available by the first epoch’s start date, currently scheduled for November 15th 2022.

As always, we’d like to gauge sentiment before moving forward with the Snapshot voting.

What’s your thought on this?

As I interpret this, each epoch would allow a user to deposit X DOUGH and receive a 30 day TWAP with a discount applied, and discounts would increase as time increases. The amount per buyback is determined by the budget.

The key problematic aspects as I see it is that

Yearn offers a similar buyback program which is fueled by streamed rewards. Notably streaming the rewards to the buyback contract over the epoch acts as a pseudo auction mechanic limiting the amount any particular actor can secure at once from the total available each epoch. This means there are several opportunities to utilize the buyback and multiple actors have a chance of gaining access vs a single large participant at the start of the epoch.

Alternatively there is the reverse LBP approach, which aims to buy back at a price between current value and relative treasury value. Start at a 99% discount vs treasury value and track up. (or be more direct and start at current market price). Once the price is greater than the market price holders who want to sell can sell where the more people exiting at a particular epoch the greater the discount is relative to the end price of the auction.

This also acts to limit how much any participant can tap into the total available at a time but rather than TWAP informed price, its demand informed per epoch (where TWAP is used for starting the LBP, but is not the settled price at time of buyback)

Hey @BlockEnthusiast thanks for sharing this.
I’ll try to address your considerations by providing additional elements which may help better framing the intended scope of this buyback.

The key problematic aspects as I see it is that

Hope this clarifies! Thanks for pointing out the alternative approaches above: definitely valid should the scope of the buyback be to pave a route for hodlers to migrate to AUXO, which again is not the scope initially envisioned.

The following post will aim at reflecting on the initial design and execution of the buyback mechanism. Feedback provided by the community has been deeply taken into consideration and utilised to redesign and propose a few changes to the program.

What we designed for

To start, the goal of the buyback program was mainly twofold. First, it was meant to offer liquidity providers a slippage free exit for the Dough side of their LP positions given the termination of the Doughpamine incentive program. Second, it wanted to provide Dough holders who did not wish to upgrade to Auxo a similar type of exit. The complementary goal of this offering was to avoid LPs and Dough holders from selling to the open market thus further depressing the price of Dough. Ultimately, all Dough bought back by the DAO will be burned along with the Dough already present in the treasury.

While the buyback program was intended to serve the purpose and participants mentioned above, it failed to fulfil such purpose given how a number of system mechanics and parameters were selected. Perhaps one of the main fallbacks came from how funds were actually being issued. Instead of topping up the buyback contract by streaming funds, which would have allowed multiple participants to participate in the program, funds were deposited in the contract in a single transaction thus allowing for a ‘first come first serve’ circumstance where a small number of addresses took basically the entire allocation. Fortunately, as a risk mitigation effort, the team had only deposited a mere fraction of the entire buyback budget and therefore there is still plenty of balance for users that still wish to participate.

Another issue derived from the utilisation of a past 30 days average market price (TWAP) as the price set for the buyback. This time length was selected to avoid the buyback price from being too sensitive to sudden price movements. Nonetheless, as the market crashed - and Dough price accordingly - a few days before the start of the buyback, the market price of Dough turned out to be 30% to 40% lower than the buyback price right at the start of the program. The arbitrage opportunity obviously did not go unnoticed and increased the incentives for early buyback participants to take advantage of it. As a matter of fact, even a trading bot managed to trade the arb.

With all this being said, it becomes evident that the buyback program did not serve who it was intended to and that a redesign of some of its aspects had to take place. The following sections will outline such design improvements, a number of which were proposed by the DAO.

In light of the events occurred and the purpose of the buyback initiative, the design changes that would be implemented are the following:

While the streaming of funds is an ideal solution for allowing a larger number of users to participate, it may not be as ideal for wallets holding larger amount of Dough. For the latter, participating in the buyback could come at a risk of being very time-consuming and not having the guarantee of being able to sell their Dough to the contract. For this reason, the team has also decided to offer wallets holding more than 200,000 DOUGH a buy-back deal over the counter (OTC). In this respect, the OTC buyback price would be equal to the one offered by the buyback contract the moment the OTC transaction is taking place. Furthermore, the budget that would be utilised for OTC buybacks would be taken from the budget allocated to later epochs of the buyback, starting from the very last one. Please reach out directly in Discord DMs to @gabo or @bennet if you would like to perform an OTC transaction. In sum:

The program will commence again on the 13th of December, 2022 and epochs will last two weeks as was set in the previous iteration of the program. Discounts have also been revisited and will follow the ones listed in the table below. Finally, budget and pricing for the buyback of eDOUGH remains totally unchanged. 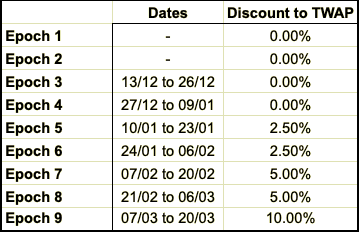 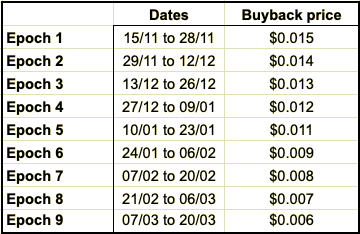 We hope that the adjustments proposed will level the buyback playing field and allow a larger set of users to participate in the program. We would also like to take this chance to thank all DAO members that participated constructively in the proposition of new execution mechanisms. Shall you have further proposals or comments on the current one, please don’t hesitate to make your voice heard.