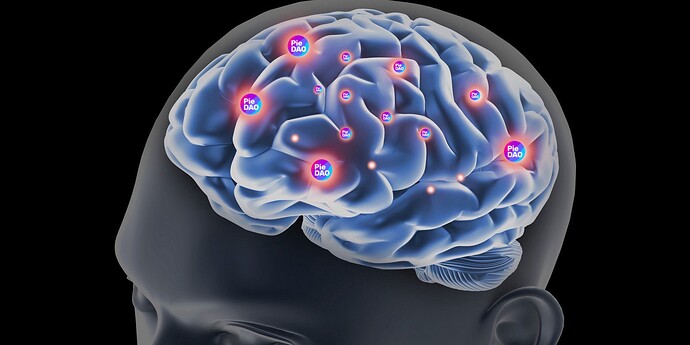 This proposal introduces a new design of the PieDAO incentives program proposed for both DOUGH & PIEs’ liquidity provision.

The proposal will touch the following 3 topics:
1) “PIE”/DOUGH + DOUGH/ETH pools construction on Sushiswap
2) Introduction of a per-block distribution of DOUGH incentives
3) Proposed launch of this program for PLAY/DOUGH & DOUGH/ETH

RATIONALE
The current incentivization of liquidity pools doesn’t seem to effectively boost growth in TVL for the Pies, or streamline the role of DOUGH at the heart of the PieDAO ecosystem.
Today’s proposal marks the start of a brand new approach to liquidity incentives, putting DOUGH at the center of all PieDAO products.

1) “PIE”/DOUGH + DOUGH/ETH pools on Sushiswap
The construction of liquidity pools for PIEs as “PIE”/DOUGH pairs, in conjunction with the promotion of a deep DOUGH/ETH pool where most trades would eventually get routed through, could bring a number of benefits vs the current fragmented solutions thanks to Sushiswap’s multi-hops feature for the routing of swap orders across different pools. Primarily:

Below a comparison of the nominal DOUGH issuance proposed as part of DOUGHpamine program vs the current one:

Below a projection over 1 and 3 yrs of the DOUGH monthly issuance for DOUGHpaming (+ Extra-kick) vs. Current incentives, also highlighting the liquid portion of rewards. 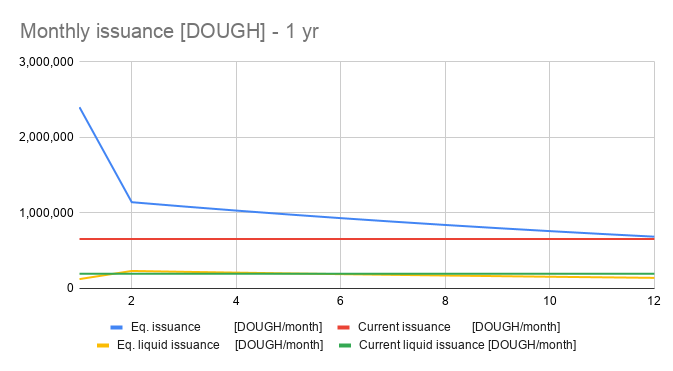 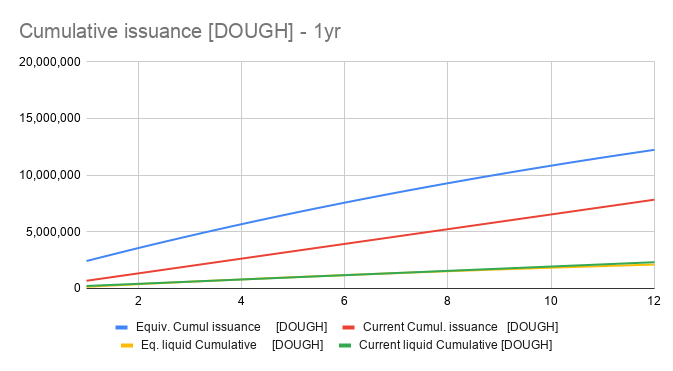 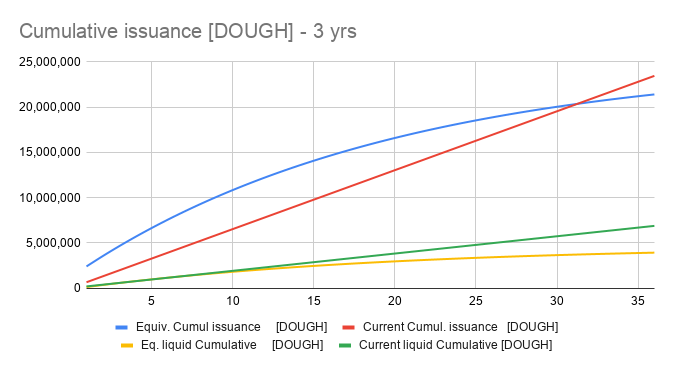 3) Proposed launch of the program on PLAY/DOUGH & DOUGH/ETH
We are thrilled to propose (pending Governance vote) the launch of this new incentives program with the PLAY/ DOUGH and DOUGH/ETH pools on Sushiswap!

PLAY has seen an unbelievably warm response from the community and likely represents the perfect candidate to make a splash within the ecosystem, putting the right emphasis on this new incentive program.

Below the proposed specs for the incentivization of the two pools, exemplifying their evolution over 3 months also in term of projected APR to LPs for different liquidity levels (figures are merely indicative).

Under this scenario, currently incentivized pools would be initially maintained with reduced incentives, pending their whitelisting by governance vote, to take part in the upcoming periods of the DOUGHpamine incentive program.

We welcome any feedback and questions on the above proposal and target to move to a Snapshot vote over the next few days, to be ready for launch asap early next week.
Stay Crusty!

Not a fan of 0.5% withdrawal fee at all. That leads to even less TVL, and we need every bit we can get atm.

BCP liquidity for example is so low I can barely transact in it and I am just a average farmer.

Agree on everything else you said

Introduction of a 0.5% Withdrawal fee collected by the DAO Treasury form leavers.

Does this refer to withdrawal from the sushi PLAY/DOUGH and DOUGH/ETH pool?

I would love to provide liquidity but I hate impermanent loss and this will bite us in the ass with our beloved $DOUGH and the others.

I actually moved to Bancor with all my liquidity and will never move back.

I suggest that the pools are created on Bancor and you will see liquidity poor in like crazy.
Together with the Bancor team you can setup incentives for your pools.

First you need to ask the community for whitelisting, and then coordinate a rewards program.
We then would be exposed to the Bancor community and get also liquidity from other Bancorians.

Lets move to the future of AMMs and let us provide liquidity without impermanent loss via Bancor.

Also trading any other token is just a single hop: like $LINK <> $DOUGH

Is there a specific reason for going with Sushi over Uniswap or Balancer? Based on my understanding, Uniswap is more popular and v3 will have some interesting changes for the AMM model and Balancer has better controls over the pool attributes. All three can take advantage of routers.

Also one thing I dont like about this article is that you want to solve poor tokenomics with liquidity incentives. This is doomed to fail on the long run.

All have impermanent loss as a fundamental design problem.
If $DOUGH moons, how will you feel as a LP when 50% of your pool legs behind? Not goodie…

And I must agree that Balancer is better than Sushiswap or Uniswap. I dont see a reason to move to Sushiswap. Moving to Sushi wont provide more liquidity. Why should it?

If there is not enough liquidity, then rather looking for the AMM, the problem lies more likely with the underlying asset.

The problem is this proposal wants to fix all underlying issues of the tokenomics and indices with a move to Sushiswap? Doesn’t make sense.
We need to have other discussions right now about tokenomics of $DOUGH and better index designs.

All three can take advantage of routers.

This is incorrect. Uniswap at its current stage only provides multihop over ETH / WBTC, they are looking to change that in v3. My understanding is that trade on Balancer V1 would be a lot more expensive assuming they could enable this sort of routing.

As for now, Sushiswap would be the feasible option and they already listed DOUGH as a base asset.

Uniswap is more popular and v3 will have some interesting changes

Totally agree we should use that once available.

I like that this provides more long term vision to better plan positions in advance. The three month cooldown from whitelist grants security to plan 3 months ahead in liquidity provisions and the extra kick helps coordinate seeding. That def helps smallers users participate with better confidence the gas wont eat their profits.

The switch from Balancer uneven weight to pure 50/50 should provide less slippage for DOUGH spent on incentives which I think is the right move.

I think the proposal makes a lot of sense and will add further value to DOUGH and boost liquidity and product growth.

One other thing to consider is that Sushiswap will also shortly be able to support double yield, so you will be able to earn DOUGH and SUSHI via Onsen program ideally.

Thanks BlockEnthusiast for considering my feedback.

What will happen with the current BAL pools?

But let us first compare this to the current state. At present we often use Balancer 70/30 pools, which have about 0.3% more slippage vs a 50/50 pool at the for the same order size relative to liquidity. We also often have split liquidity between Sushi Rewards and DOUGH rewards. This proposal allows us share liquidity and overlap rewards. As such Pie holders benefit from more coordinated pooling of liquidity and reduced slippage which should make up for the additional 0.3% and provide a better user experience for swaps making it easier to enter or exit a position.

This change imo primarily benefits Pie holders by better coordinating liquidity to better reduce slippage. This can reduce the need to redeem to swap several assets and exit staking/lending positions in PieVaults more effectively. I believe this will make users more confident they wont face as high slippage on exit and may be more likely to utilize Pies for a hold with the added confidence exits aren’t very high gas from many txns.

Thanks @BlockEnthusiast for the great points, which I totally second.

To clarify; Is it 0.5% of the LP tokens held by the users farm contribution on withdrawal?

@margin, yes I confirm this being the way the withdrawal fee is intended.

This change imo primarily benefits Pie holders by better coordinating liquidity to better reduce slippage. This can reduce the need to redeem to swap several assets and exit staking/lending positions in PieVaults more effectively. I believe this will make users more confident they wont face as high slippage on exit and may be more likely to utilize Pies for a hold with the added confidence exits aren’t very high gas from many txns.

One additional aspect worth considering is that, as part of a Treasury diversification effort it could make a lot of sense for PieDAO to also keep a balanced exposure in some Pies, of which a portion could be provided as additional liquidity within the 50/50 pools paired with DOUGH at no additional cost for the DAO (which holds off circulation >83% of DOUGH). This would improve the liquidity levels of PIE/DOUGH pools and contribute to the further reduction of slippage.

Thanks for getting this together. How does Sushi benefit from this? I like that DOUGH is given more utility by changing the swapping bridge, what are future plans of this? Are there more product ideas that benefit from ETH/DOUGH—DOUGH/PIEDAO? Trying to get the type of scope that comes with a partnership like this.

I do enjoy the SUSHI experience though.

Im just here to see if this passes and get a design ready. Smarter heads like you guys and gals know better than me.

To clarify; Is it 0.5% of the LP tokens held by the users farm contribution on withdrawal?

@margin, yes I confirm this being the way the withdrawal fee is intended.

I think it’s a good idea if it helps DOUGH, even if i really liked the BCP pool (only BCP), but i understand it doesn’t really help $DOUGH.

Could we also think at a xDOUGH, or something to really make $Dought attractive ? And stream fees generated to holders ?