The Doughpamine programme was launched on April 2021, and has been running for 18 months with a total distribution of 18.8 million $DOUGH to liquidity providers so far.

The rewards distribution had both positive and negative effects on the DAO: bootstrapped liquidity on one end, but potentially contributed driving the $DOUGH token value down significantly by being a source of sell pressure in the market.

We propose to terminate the Doughpamine programme in order to stop the bleeding.

PieDAO currently incentivizes 4 liquidity pools (a.k.a. Farms). These liquidity pools have been distributing 18.8M $DOUGH rewards until period 18 (block 15625918). Note that of the total incentives distributed only 20% were immediately liquid, while the remaining 80% would vest linearly over one year.

As visible from the table above, around 80% of the Doughpamine incentives are being distributed to pools that have very high costs of liquidity. At current market conditions, the $Play/$DOUGH pool is paying $0.86 for each dollar worth of liquidity in the pool. This figure has also reached $1.52 in the past, meaning rewards substantially outweighed actually provided liquidity, resulting in quite an inefficient incentive programme.

Currently, the weighted average cost of liquidity sits at around $0.7, of which 20% liquid and 80% escrowed and subject to linear vesting over a year. The fact that the DAO has been overpaying for liquidity provision has certainly been contributing to the $DOUGH sell pressure, possibly inducing a resulting poor price performance.

We can conclude that:

The rewards distribution will be stopped effectively after the snapshot vote, considering it ends in favor of this proposal (+60% FOR).

In this proposal, we are presenting both a problem and an immediate action that we see fit to take place in order to decrease the selling pressure of the $DOUGH token. We aim to stop the bleeding and to stop renting liquidity while we find a more sustainable model. Please find the options to issue your preeliminary vote to gauge sentiment before we move forward with the Snapshot voting. Comments are welcomed of course.

What’s the plan for pie liquidity?

agree … the DAO itself should provide the liquidity for those pairs

BCP hardly costs anything. I think we should keep that. What is to incentivize people using the baskets right now? How about reducing the program rewards rather than completely kill them.

I imagine it’s going to be hard to swap/trade any of these pairs if we kill the program instantaneously.

I get there’s sell pressure but with the 80% vesting the sell pressure isn’t going to go away from killing the farms anytime soon, until there’s more value AUM the gov token doesn’t have the value we all want.

We need to keep growing and getting people to buy pies

I’m all for this in the long term, I also think the DAO should own the liquidity. But what is the plan for the liquidity model going forward? Shouldn’t we discuss this more and prepare for a “swap over” before we kill the current liquidity model? I imagine without the incentives, the pies could become super illiquid and impossible to use, destroying the usability of PieDAOs products.

Would it be a good idea to consider putting a small portion of the Treasury Farming Yield towards purchasing pies/ETH to accumulate treasury owned liquidity? Or would an Olympus DAO bond model work better? Both?

*EDIT: I did some digging and found [Proposal] PieDAO Owned Pie Liquidity

I support terminating the Doughpamine program in order to use 10% from the 60% allocated to veDOUGH stakers to provide liquidity for pies as PieDAO-owned liquidity.*

I agree that BCP should continue to be incentivised. In the case of BCP staking, it isn’t an LP that’s being incentivised, but a relatively inexpensive extra incentive for those who do wish to hold the flagship product over alternatives like Indexcoop’s DPI - it doesn’t cost much for a USP. Current yield for staking BCP is just over 11% (Yield Farming Info); even with the rewards for BCP cut by 75% that would be an attractive USP for a lot of people interested in indexes, and helps align holders of index products with governance.

As for completely removing the LP incentives, I think it makes more sense to phase them out steadily, since this is likely to cause less of a shock. It does seem like the right thing to do though, given how expensive it is for the DAO at the moment, and how much more it incentivises people to provide liquidity rather than stake, which is a far more passive contribution (many people can provide liquidity then not check on the DAO for months).

Perhaps it would make more sense to slash incentives by 50% each month for a few months before completely removing them.

Agree with all the pros of the termination but feel the proposed solution is a knee jerk reaction. I would like to see a phased approach to program termination.

I like this! I believe its better if the treasury owns the liquidity for dough and pies rather than incentivising LPs, its costing more. Treasury sells dough on the market or OTC (I would like to buy, but current slippage is insane) for eth/usd then provides liquidity on balancer with the funds, treasury gets too keep the fees generated from LPing.

The termination of the DOUGHpamine program has been in the air for awhile. But a lot of passive LPers may not be aware of it. If we’re going to terminate it on short notice a preemptive post in #announcements warning holders of the impending change (and upcoming vote) would be prudent.

It does seem like a knee jerk reaction to terminate immediately at the vote. A month, aka 30 days notice, would deter complaints from inactive LPers.

I would be sad to get rid of my BCP, but why stake it if we don’t get DOUGH?

Thank you for all your comments and considerations.

As we’ve been pondering in the past couple of months over terminating the Doughpamine programme, Pies liquidity has obviously been our main cause of concern, as many of you have rightfully pointed out.

The following response aims at expanding on the nature of our proposal and at providing a bit more context on the matter at hand.

First of all, it is worth mentioning that not all the liquidity provided in the pools are staking for Doughpamine rewards. As a result, while incentive termination might likely prompt a number of users to withdraw their positions, these markets will still maintain a certain degree of liquidity. As non staked LPs have been earning purely through fees generated, their fee accrual might actually increase as staked LPs withdraw. Therefore, non staked LPs are less likely to withdraw their positions, thus guaranteeing pair liquidity.

Nonetheless, not every pair is exposed to the same liquidity conditions. The table below serves to provide more granularity on the different pools.

As visible, in DOUGH-ETH pools on Uniswap and Balancer the DAO already owns majority of the liquidity. While in the former no LP will be affected by Doughpamine termination, in the latter only 14.7% of LPs will cease to receive Dough rewards. Moreover, the DOUGH-ETH Sushi pool has 40% of LPs staked into Doughpamine. Meaning majority of the pool would not be affected by ceased incentives.

The only pool which could potentially receive a liquidity hit from halting Dough rewards is the Play-Dough pool on Sushi where stakers hold more than 80% of the liquidity. Being aware of this, the team could consider providing liquidity to this particular pair in order not to render PLAY rather illiquid.

It is also worth mentioning, that the Doughpamine programme was anyways designed to gradually reduce over time until pools could be sustainable purely through fee revenue. As a matter of fact, the very vast majority of planned incentives budget has already been spent as per the chart below. 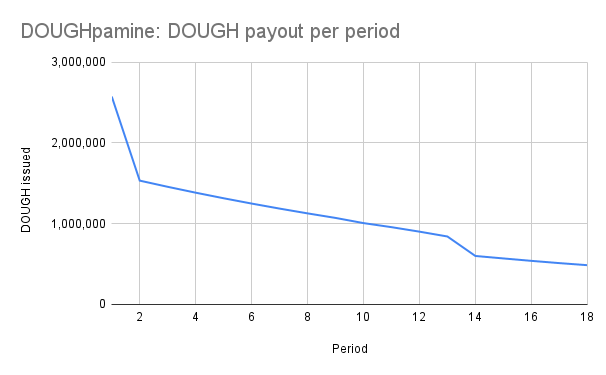 A final consideration goes for users wishing to maintain at least BCP incentives given their low liquidity cost compared to the other pools. While incentives received by BCP are effectively small relative to other incentivised pools, fees generated for the DAO by BCP (0.46% of streaming fees) are substantially lower than the total rewards distributed to BCP over the entire duration of the Doughpamine programme, therefore resulting in a net loss for the DAO.

Thanks for clarifying, I checked on-chain and saw that most of the liquidity was DAO owned, no need for incentivising imo.
Im for terminating them immediately rather than waiting some months.
What are the plans for DOUGH burn, 99 mil supply but only 19 mil veDough, I believe most people would be afraid of getting diluted including me, do you think the DAO could survive if we burn the supply and only veDough, non-DAO controlled circulating and allocated to DAO controlled liquidity is left. Dough could become harder asset and directly price should be correlated to Treasury assets.