PieDAO has been discussing the idea of a $PFP pie in various forms for many months, but various issues with how the pie would be constructed have prevented us from formally organizing the product. This proposal is the result of a recent effort by the $PFP team (@Adrian.A, @BlockEnthusiast, @dantop, @Gabo, @hamball, @naan, @RichAndCreamy) to move the product forward in a realistic and timely manner.

The NFT space is large and broadening quickly. As a DAO, we started exploring this investment space with our pie, $PLAY which has a focus on metaverse gaming. Earlier iterations of $PLAY included small amounts of PFP coins such as $PUNK and $MASK, which were eventually removed during processes to narrow the scope of the product. However, we believe that the initial inclusion of these assets was an early indication of interest in a now-large PFP / NFT art space that is emerging as its own sector, with markedly different dynamics than gaming projects.

In the first proposal to build a $PFP pie, the mechanism that was suggested to fund the underlying assets was a pie made up of shares from NFTX floor-priced vaults. However, it became clear that this approach was not currently possible due to issues with liquidity, which would prohibitively limit both the maximum size of the pie and the diversity/quality of assets it could contain. While this kind of approach may be possible in the future as organizations like FloorDAO release their products to supplement liquidity, the team has decided to propose an alternative model to the $PFP pie.

In the model the team is now proposing, the pie would take the form of a closed investment fund, with the DAO organizing an initial funding round where participants could deposit ETH into a smart contract during a specified period and receive tokens in proportion to their contribution.

Assuming a successful fund raise, a $PFP fund administration and curation group would then use the ETH collected to purchase NFTs meeting a clearly defined set of criteria developed with input from the DAO. NFTs would be purchased at ‘floor’ prices from collections with sufficient supply and liquidity to allow the tokens to be easily valued. If a minimum amount of ETH is not reached during the initial fundraise, contributors would receive a refund.

After a predetermined amount of time, the NFTs purchased by this fund would be liquidated, and any holders of the $PFP token would be distributed a proportional share of the ETH that resulted from the sales.

Depending on implementation cost and complexity, we may also choose to open the fund at regular intervals before the liquidation period to allow new capital contributions and/or token redemptions. These would occur at a valuation determined through a methodology developed by the team and published at the time of the initial fundraise (rather than calculated through an oracle or similar automated technology). 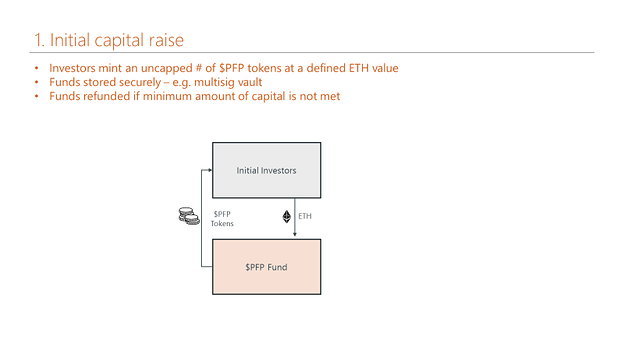 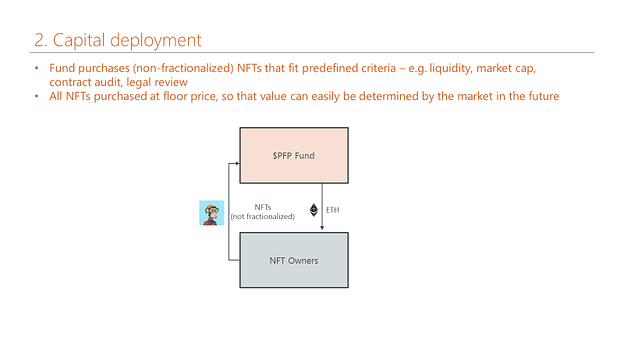 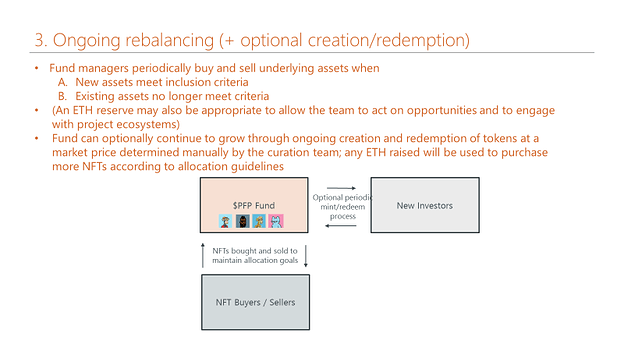 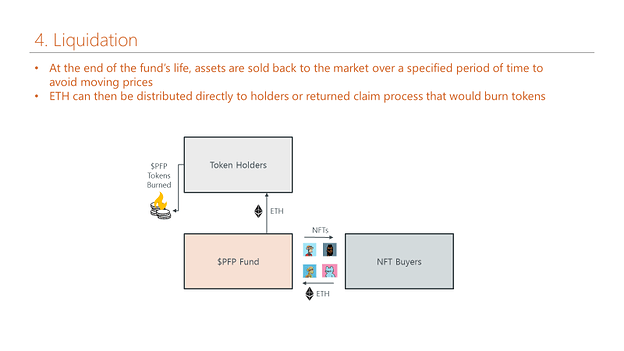 The team believe this approach will result in a product that is:

As a bonus, a new product type will be added to PieDAO’s technical portfolio, which can be used in a wide range of scenarios that involve assets that are non-fungible, illiquid, and/or difficult to value.

While the team recognizes that this model has changed significantly from the original proposal, we believe that it is important to get a product released to capture the growing interest in the PFP sector from investors who would like to diversify their options. We expect that the DAO will have questions, but we believe that this method of construction is the best possible in the short term. Since this method has a built-in end date, it allows for reevaluation in the future as the technology to power other solutions is developed.

If this proposal is approved, next steps would be to:

Do we know already which is the fundrasing threshold?

And in case of a refund who will cover the gas? (take this topic for the later development of this proposal)

contributors would receive a refund.

additionally @Hamball the Poll says Gate2, this proposal is at Gate 1, if you could correct that to avoid missunderstandings that’d be great. Same with PIP number, that is granted on a later stage. (@snook FYI)

Changed the title; unfortunately can’t update the poll name as it’s apparently locked after the first 5 minutes, but I’ve put a clarification above it.

Re: the fundraising threshold – it’s not established yet since it’s dependent on decisions related to asset allocation and revenue generation. We need to make sure the pie is big enough to a) hold the collections we think are necessary to deliver a solid product, some which may have 10-100 ETH floors, and b) generate enough revenue to compensate for the ongoing work that will go into diligence, curation, etc.

Quick thought on the gas cost for the refund (Constitution DAO, anyone?:-): One of the revenue mechanisms I’d like to consider is a small additional contribution when tokens are minted - e.g. .01eth - that can be used to fund operating expenses and reward people for referrals. If we don’t hit the minimum to launch the product, we could potentially use these funds to facilitate the refund.

So purchase NFT from polygon or from ethereum only?
I would like Aavegotchi to be part of it since it is really a PFP.
Arcadians are good to include as well.

Thank you @Hamball for writing a detailed proposal.

From my perspective, the proposal position itself as an excellent compromise between building a floor fund as originally envisioned in the previous version using NFTX and the ability to access a wider range of opportunities in the broader marketplace outside of NFTX itself.

What is the set of acceptance criteria proposed at this moment in time and is there a revision policy being considered to keep them up-to-date?

After a predetermined amount of time, the NFTs purchased by this fund would be liquidated, and any holders of the $PFP token would be distributed a proportional share of the ETH that resulted from the sales.

The part of the liquidation of assets is probably the most tricky. What if there would be recurring moments set in time to exit the fund (ie: every 6 months)? Holders could make a withdrawal request beforehand to signal their intention to exit at the next available round, the curator team would then go ahead and liquidate assets or possibly match that request with new investors willing to enter (coincidence of wants).

Generally speaking, I’d be more interested in a fund that expands the scope beyond the PFP segment only and has a mandate to create a curated portfolio of highly valuable pieces which are worth more together as a collection. The proposed model, considering it relies on a set of Curators, would allow for that, while I understand it comes with significantly more responsibilities on the Curator team.
Great work so far! Excited to see what’s next.

How can I guarantee the buyer means of certification and accreditation?

Authenticity, fingerprinting providing data such as: IP, time, author(s) of the NFT.

I am a full owner? example: “you can buy a book and own the book, but you have no rights to the content of the book”.

What kind of NFT artwork will be sold? example: “A physical artwork that is digitized and sold as NFT, implies the permission of the original author of the corporeal artwork”.

Will there be a Marketplace?

These are traditional questions, which may arise from buyers and investors.

When we acquire a piece of art, we want security, status, relevance, rarity, since we are also acquiring an asset

Thanks for your feedback and congrats on your first post in the forum !

Welcome to the forum gang !

The team has compiled and discussed the feedback we received on the first poll and incorporated it into an updated proposal that will be posted separately shortly.

One of the suggestions from @alexintosh above – and that had also been discussed by the team a few times while developing this proposal – was to consider expanding to NFTs that might not necessarily be intended for use as a profile picture.

We discussed this in depth and think relaxing the PFP-only criterion is the right move, so we’ve added language to the new proposal and adjusted the working name of the project to reflect this. There are a few reasons, but main one is really simple: The space has evolved in a way that the distinction between art that can vs. cannot be used as PFP is not necessarily a major driver of value or investment rationale for many of the best-known and most valuable projects.

Take, for example, Veefriends vs. Proof Collective. The exceptionally high floor price (15-40 ETH) of each project comes not from the art but from the access each NFT grants to the project’s influential founder and exclusive community. The former can be used as a PFP while the latter can’t. Should we exclude Proof as an option but include Veefriends because of this? Should we exclude both because they’re really ‘access’ projects vs. PFPs? Similar questions come up for blue chip art-based projects that aren’t necessarily PFPs, e.g. ArtBlocks.

This change doesn’t mean that the we believe every kind of NFT should be fair game for the index or that the associated product will be called $NFT. This is just to give us more latitude as we work toward defining clear inclusion criteria for the index.

The core purpose is still to provide diversified exposure to valuable projects in the space without overlapping with existing PieDAO projects. @jnova and @naan have started some discussion in the Discord pfp channel to narrow and/or better define this. Would love thoughts and engagement here from folks who are interested.

I will repost this along with the new proposal. Thanks and stay doughy!

Thanks for your thoughts, @MrCorrea!