Abstract: Task small groups with the management, maintenance, and growth of an individual pie. Use KPI options to incentivize and reward successful growth.

Background: Recently there have been a number of exciting new pie proposals that have yet to be implemented, and some existing pies such as USD++, DEFI+S, BTC++ have not yet been upgraded and rebalanced to unlock the full benefits of PieVaults or streamline their diversification. The core team at the same time is currently focused on large-scale upgrades that will soon see the light, including DOUGH staking.

This proposal seeks to expand the DAO’s capabilities and product offering while at the same time further decentralizing its governance and development power.

Proposal: By creating individual task forces assigned to a specific pie we will be able to rapidly expand our product offering and boost growth.

Ideally, each Pie-specific task-force could be initially composed of 2 to 4 members, in charge with the management of the pie life cycle and growth, from proposal to deployment, rebalancing, and to the definition of partnerships and strategic integrations aimed at maximizing the Pie launch and future exposure.

The working group would get incentivized via a KPI option token collateralized in DOUGH, which tracks the Pie TVL. All KPI tokens would be delivered at the time of deployment of the pie to a multisig composed by task-force members, which can decide how to manage those in complete autonomy, for instance also considering the creation of specific incentives schemes with Key Partners which may lead to a TVL growth of the Pie.

The KPI would be structured as follows. 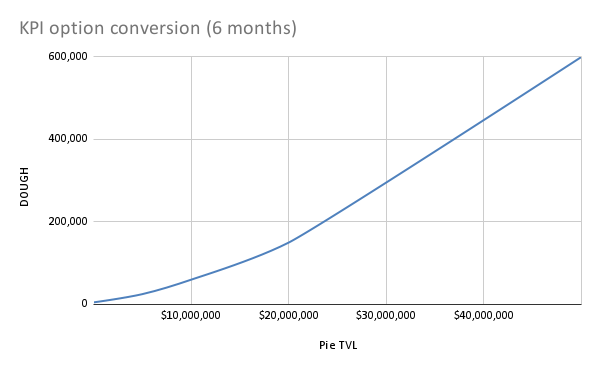 A first implementation of KPI Option Tokens is proposed to be piloted with the launch of $SCALE.
@Lui

An issue that I previously raised and Lui elaborated on in a meeting is that the TVL may not be an indicator of effort or success in launching the pie, but rather be tied to the overall performance of the market. If, for example, a pie were to launch in a bear market or just before a sudden down turn it may be difficult to get any meaningful buy in. This is obviously contrasted by a bull or even side-moving market where folks are looking to diversify or optimistic regarding alt-coin growth. Even with a 6month window a major dip near the end of the option period could mean an exit of value.

I currently don’t have a great alternative for metrics that could be tracked.

would second what adam said there about tvl being prob more reflection of market conditions than effort put in. Do the pie builders strongly prefer options over a flat payment? else to help minimize the market vol, maybe can trim the tails of the distribution (remove the 0 and 50MM buckets)

Good point. One way to help this is to denominate the TVL targets in ETH instead of USD

in a meeting is that the TVL may not be an indicator of effort or success in launching the pie, but rather be tied to the overall performance of the market. If, for example, a pie were to launch in a bear market or just before a sudden down turn it may be difficult to get any meaningful buy in. This is obvious

I agree with @BVB. Maybe the TVL over 6 months needs to be ponderated with a BCP or another piedao index to see the relative performance as well. We would have then the following structure for KPI : min(TVL, Adjusted TVL)

Instead of TVL you can also use the number of wallet with the pie. Or a mix (50/50). Or even the number of token so you don’t really care about price fluctuation .

On a more practical aspect. How do you chose people in each group ?
Also 6 months seems a very long time for DeFi. I don’t remember a lot of people around here 6months ago and still around now.

How do you chose people in each group ?

My two wei on the subject is that it’s up to the team lead.

The initial methodologist act as a product owner, as such he create a plan and a budget, he opens positions, finds the best people and execute according to the plan he has proposed to the community originally.

While I think rewarding by the number of accounts that hold the Pie token is a good idea in principle in the sense of incentivizing the right goal, I’m afraid it might be a cheap vector for the working group to manipulate the result toward their success. Leaving that vulnerability open might not be wise.

I think ETH denominated TCL as @jnova suggested might be the most incentive compatible design, but I’ll give it more thought.

yep probably not the best idea. Don’t know if a mixture of all of this is possible. like 33% token holder, 33% TVL…

I agree that ETH denominated TVL could represent a viable option to net the market effect. 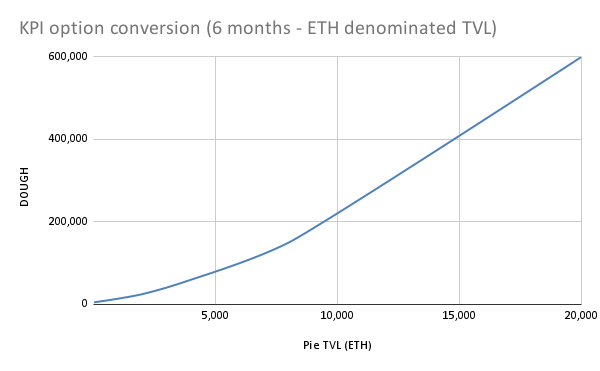 That’s true, the first generation early adopters won’t try to trick it. But the second wave will have people who game the system just because they can. So that needs to be expected…

I would strongly advise keeping things simple for the first iteration, which is time-boxed regardless.
Have one single KPI, TVL is simple and works as a marketing tool as well, having that ETH based would also work great.

Agree with Alex, let’s keep it simple. We can iterate on the option based on the results. My bias would be that the relative performance to pie average + TVL would be a good place to iterate towards but some hands on experience will give us a better idea.

For SCALE, I’m writing up the roadmap and have a couple calls scheduled with folks this week. I’m starting to pull the trigger on some design services as well. Once the roadmap is shared, how do you see the time line / process looking from that point to making the multisig and being in business?

Glad to see some consensus formed around the TVL proposal (possibly ETH denominated), at least as a preliminary iteration of the KPI token.

I’d propose to move this on and start the required KPI setup in cooperation with the UMA team.

Agreed, I’m in favor of getting this going.

TVL is a good, simple measure for the first iteration!

Hey Guys, I’m new here, my name’s Corey and I’m helping Adam out with the design collateral for $INFRA.

I thought I’d throw my 2c in on this as a newb. An ETH based TVL is good but I believe the 6mth timeframe is too long. I also think the distribution points could be structured better to allow for quieter market periods. 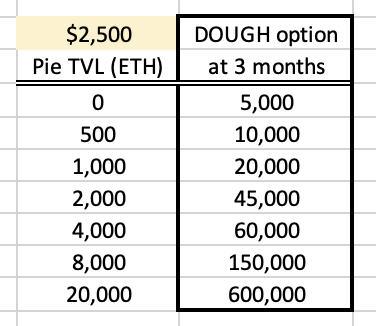