Following up on the community sentiment emerged from this [thread] (Rebalancing of $Play) regarding the $PLAY rebalancing, I’ve been putting together a proposal of Prospectus for PLAY aimed at clarifying:

You can check it out here
Having collected multiple feedback, I’ll be moving this on to a snapshot vote for acceptance.

This asset tracker is intended to more conveniently monitor how the newly proposed inclusion criteria would impact each of the PLAY underlying assets (actual + potential) .

Fantastic to see the proposal being accepted with 100% Support.
What are the next steps for you @gabo?

Indeed. Prospectus was already linked to the docs, and some issues opened for others tasks.

Based on the output of such vote, a new allocation for PLAY will be computed, to be eventually adopted during the first rebalance activity.

Great work @gabo with the whole push! I think this is a great first step for PieDAO, moves that add clarity to how Pies work and make sure of no “zombies” as @alexintosh mentioned elsewhere are important if we want the DAO to grow. I wonder if an additional step would be to create a Working Group rather than bots to automate the triggers / expect community members to suggest rebalances? Perhaps it could be responsible for tasks related to both $PLAY and $PSP?

Thanks for pointing this out!
The creation of a common Working Group in charge of both $PLAY and $PSP could definitely be an option, even though it may bring some complexity in the KPI option creation, being TVL driven.

But I agree many synergies could be explored between the two pies both on Business Development and “Operations” (e.g. Working Groups should be progressively taking on all tasks related to the rebalancing of Pies).

You can find here an updated version of the $PLAY asset tracker recapping how both current underlying assets and newly-proposed assets align to the voted criteria for inclusion defined in the Prospectus.

Here the outcomes of such analysis

Assets currently included in $PLAY but NOT fully meeting the criteria

Here’s the snapshot vote to signal your preferences https://snapshot.org/#/piedao/proposal/QmWw21mShD2EPtWd9tzy7ZFrz9pLVwTHsBmnrNbQ1mcJ42

Great analysis, and engagement on the snapshot. I believe we’re all set for rebalancing and updating the pie, aren’t we?

Hey all, sharing here some personal considerations on the current PLAY allocation, its limits and potential.

A possible way to address most of these issues would IMHO require the following action points:

-> Remove all assets with negligible liquidity on DEXes, also capping the allocation of each asset in order to always keep its slippage below 2% when minting PLAY. (this by making each asset’s allocation also a function of its DEX liquidity)

-> Drastically cut the current long tail mentioned at point 1, getting down to 8 underlying assets total

Below the relevant data considered

The computation of the above aspects as part of the allocation methodology would suggest the following output to be up to vote:

Resulting in this final allocation for PLAY 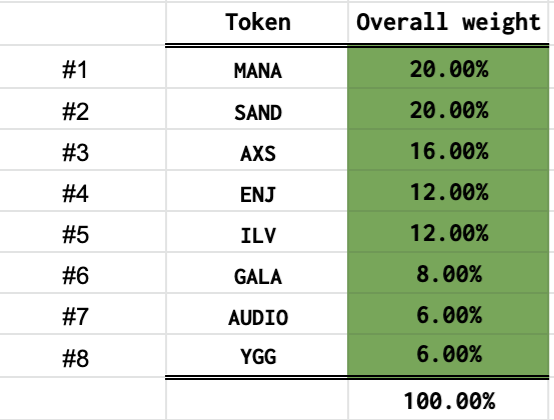 NOTE: This resulting allocation was optimised in order to mint up to $1m in value of PLAY in a single transaction, with a total slippage of 0.75% (target < 1%)

You can consult the full sheet here.
Looking forward to collecting as many preliminary feedback as possible, to eventually assess the general sentiment of this proposal through snapshot vote.

I don’t feel great about losing all the NFT exposure.

I confess neither do I. Still the low liquidity of most NFTs is truly undermining the PLAY scalability as a whole.
Maybe a wiser option could be to reallocate NFTs in another product (PFP?).

+1, would love to continue to hold some exposure to Punks/Socks/Masks in something like PFP.

Thinking about this more, we are early and out to be doing our best to scale the products and access to them. PLAY stands good chances IMO, and I find myself in support of the changes.