This is a proposal to use UMA’s KPI options to align community incentives and boost the percentage of DOUGH staked in recently announced DOUGH Staking & Governance Mining.

What is a KPI option?

Key Performance Indicator (KPI) options are synthetic tokens that will pay out more rewards if a project’s KPI reaches predetermined targets before a given expiry date. Every KPI option holder has an incentive to improve that KPI because their option will be worth more. This is intended to align individual token holder interests with the collective interests of the protocol.

PieDAO can use UMA’s Long Short Pair (LSP) contract template and Optimistic Oracle create our own KPI Option tokens. These would be backed by DOUGH and can be valued against the KPI we set, in relation to the target DOUGH staking campaign.

You can learn more about the concept of UMA options here.

Below is an example of a successful use of UMA KPI options, designed to give an idea of its mechanics and effectiveness.

UMA itself adopted the KPI option strategy to grow its own TVL, distributing 1 million of KPI option tokens to governance members of various protocols like Balancer and Sushiswap on 31st of March 2021. The goal of the KPI option was to boost UMA’s TVL, with the ‘north star’ metric set at a bold $2bn. The KPI options were set to expire 3 months later, in June 2021. At expiry, each KPI option was redeemable for a defined amount of $UMA, depending on how much of the set KPI (UMA’s TVL) the community has achieved.

At the time of the initiative start, UMA’s TVL was $72m. Within 2 months of the initiative, the TVL hit over $200m, while spurring the growth of an independent community movement, ‘superUmans’ who drove forward the UMA integrations, partnerships, marketing and more.

Bottom line is that the initiative was broadly successful, and has since been adopted by other projects like Aragon, Badger and others,

The Relevance to PieDAO

With the launch of Staking, the efforts of the PieDAO community are concentrated towards the ‘north star’ metric that has been defined as having at least 30% of DOUGH circulating supply locked in the staking contract. I believe issuing KPI options is a great way to coordinate these efforts and add cryptoeconomic incentives on top.

PieDAO has a large and engaged community of thousands of members, and I believe that a tool like this can help boost the cohesiveness with which we cooperate.

Below is the proposed scope of the KPI Options for DOUGH staking:

Total option payout per KPI hit: growing in a step function, with examples below 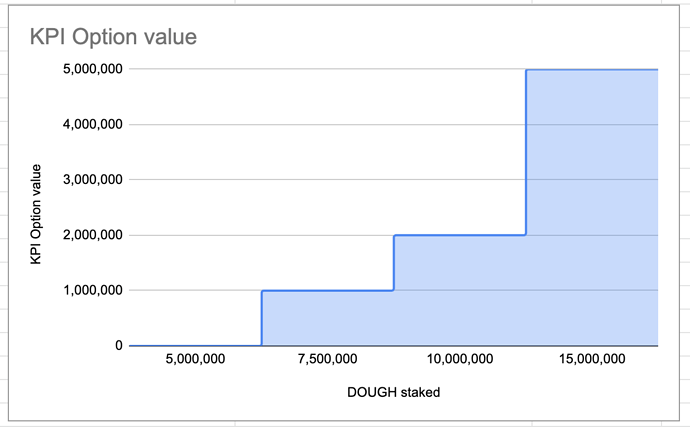 For this proposal to go forward, the community would need to express their opinion at the Governance vote to move DOUGH to mint the KPI options.

I believe this initiative would help boost the success of DOUGH staking and attract a larger amount of talented individuals to achieve that. Ultimately, having more DOUGH staked is beneficial for all stakers!

The beauty of the UMA’s KPI option design is that the treasury does not spend funds unless the objective is met - in which case it’s funds well spent!

Are you in support of the proposal?

I strongly support this. No comments at all.

I guess you meant SLICE

Love the proposal and has my full support

Hey PieDAO. As a SuperUMAn, my support for this proposal is a no brainer. But more important, please feel free to reach out to any of us on Discord or here in the Forum. We’re a lively bunch and happy to assist in any way we can throughout the process. Cheers.

Update
Thanks to the UMA team we manage to fast track the process.

Specs are merged in the UMA repo.

Next steps to make this happen are the votes to move the necessary tokens.

A snapshot vote is going to be open shortly to collect the sentiment on this initiative
https://snapshot.org/#/piedao/proposal/QmRoBy3fXHQkRyUEY48a33CpT1gvXRLNLbtitkMkHphJAD

Would it make sense and be technically doable to have at least part of the KPI options converted to veDOUGH at expiration ? It would avoid unleashing a big amount of DOUGH all at the same time on the market with possible dumps and would also contribute to having more % of DOUGH staked.

Just nitpicking but I’m all for the proposal anyway.

Would it make sense and be technically doable to have at least part of the KPI options converted to veDOUGH at expiration ?

I asked that to the UMA team and it’s currently not possible with their standard contracts.
However, I guess we could do a wrapper contract which is the only one that mints the KPI and in there have the KPI converted to veDOUGH. /cc @antodp

I guess we could do a wrapper contract which is the only one that mints the KPI and in there have the KPI converted to veDOUGH. /cc @antodp

Yes this is doable. Maybe we can go with an 80% vested and 20% unvested strategy (similar to the actual farming mechanism) or something like that.

This is a fresh idea. Very impressed with how efficiently the community has moved on this.

[UPDATE] Wrapper contract for auto staking the KPI in progress