A clear governance process is key for the DAO future. Clear guidelines help members to promote their ideas to become without the uncertainty created by unclear or scattered resources and guidelines. This proposal presents a life-cycle that upgrades our current processes and deliver a step-by-step guide that can be followed by any member.

The PieDAO Governance process has been defined in several documents that are currently not linked to one another. This can create friction and uncertainty for users to submit ideas and for community members to visualize next steps. Below are the references used for this analysis

While studying the current status, two discussions opened the door to rethink the current Idea→PIP→Vote flow to include a broather set of definitions to bootstrap the whole process

The processes above do not cover all required aspects, and it is time for it to catch up with the level of maturity that the DAO has and apply the lessons learned.

We expect to address the following points to allow proposals to be positioned for voting only after achieving an execution-ready status depending on their complexity.

We propose to introduce the following changes

Votes types are categorized in two main categories, and each one serve their own process flow

Generic Proposals are expected to be more light weight, requiering only one gate to be passed for execution.

All votes casted in Snapshot should be following one of these categories and consider the durations given below as the minimum required for their length. Types are categorized between Critical and Non Critical. Each type is described below into detail

Notarization How to Link: How to Notarize

Moderation is a need to assure that:

Gates will act as check points designed to drive proposals efficiently and require a Snapshot vote. The amount of Gates will depend on the proposal type 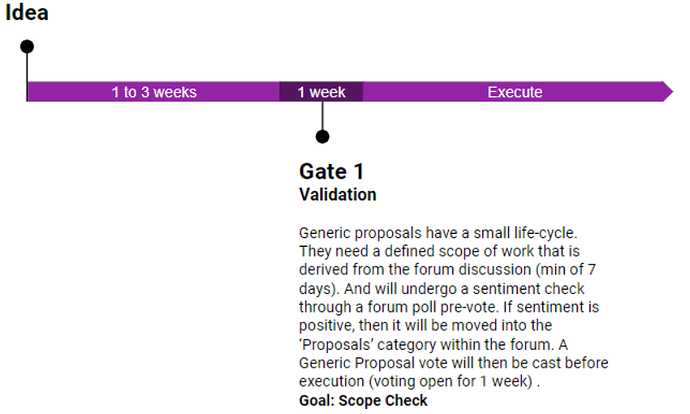 In order to pass a PIP: 5% or more of veDOUGH supply must participate (current_supply * 0.05 = result), and 60% or more of participating tokens must vote in favor (FOR)

Casted votes not following the gate steps won’t be considered for the Governance Mining Rewards eligibility process. The only exception will be Critical votes types.

Snapshot entries will not be removed from the system.

Proposals can or can not have a PIP number. Either case it is expected that they follow the following naming structure to facilitate reading

In any case, the title has to be meaningful and honor the proposal in discussion

Stages are all the steps and activites that happen between gates, which do not require a Snapshot vote. They tick all the boxes for the conversation to move towards a gate vote in good shape, and determine the flow expected for the whole lyfe-cycle of each proposal type.

Flows are visual aid images to understand what to do on each step, and they vary depending on the Proposal type. Below we will mention Generic and Improvement proposal’s into detail. 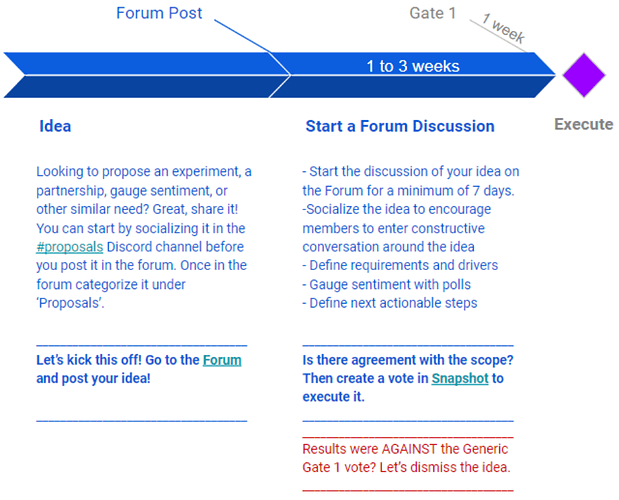 Improvement proposals have two flows to differentiate between Standard and New/Rebalancing Pie proposals.

Clarity during the process, good level of support, visibility on the next steps and MVP quality standards assurance are the key deliverables that will make us implement great products and changes and facilitate the decision making for the PieDAO community members.

Your suggestions, comments or simply support will be much appreciated!

Do you agree with dividing proposals into PIP and Generic?

Do you agree with the Gates and Stages as proposed?

Do you agree with Vote types and duration?

Do you agree with the introduction of a forum moderator role?

Well organized and well thought out. Thanks for putting this together!

Looking forward to when this is finalized and in documentation

Thanks for putting this together Adrian, massive work here! Some feedbacks / food for thought:

In order to pass a PIP: 5% or more of veDOUGH supply must participate (current_supply * 0.05 = result), and 60% or more of participating tokens must vote in favor (FOR)

Hey Tom, thanks for your comments, please see below my answers.

It seems to me that PieDAO execution capacity is not taken into account for Generic Proposals Gates. I guess there’s no point to discuss and validate ideas that will end up at the bottom of a huge backlog. Somehow PieDAO should try to achieve Just-In-Time.

I do agree on the challenge stated here. Resource availability should be considered on a case by case basis. On the other hand not all Generic proposals will required Core Contributors time, as some may be used to gauge sentiment on specific decisions.

Could you share what’s the reasoning behind the 5% and 60%? How does it compare with previous governance activity? I have the impression that this can also be tackled, in addition, by changing eligibility of staking rewards: the 1 vote monthly could change to voting in at least X% of proposals made in the last 30 days (I understand there’s some game theory behind the numbers though).

When looking at the Pie Proposal Flow I wonder if there’s an opportunity to have another type of Pies with a leaner process behind but faster time to market. Something like offering “experimental” / “lab” Pies that are just Pies without much thought in regards to rebalancing / methodology for allocation updates and at the same time without a strong marketing support from PieDAO. I guess it might be interesting to see these launch and hopefully mature into real Pies. I imagine also that supporters could benefit fast from having the pie “on prod” and then be with “skin-in-the-game” incentivised to push it to mature.

We can experiment the performance of any given potential PIE using Tiramisu for modeling. There are risks on deploying products that don’t have the right market fit, are not published and planned thoroughly. It may impact the DAO reputation on having a large list of stillborn products. Additionally those experimental pies could have liquidity issues, and may end up being a waste of resources that could have been applied to other initiatives. We need quality products, and those will demand time to be created in most cases, as if they don’t generate wealth they won’t be helping us fulfill our mission.

Last, I am of the opinion that governance’s goal is to make PieDAO goals/strategy a reality and these are missing on the evaluation of ideas / proposals. I reckon, in this sense, we’re all relying in what each community member perceives as PieDAO goal/strategy; implicitly as it surges from the opinions/discussions in the forum / Discord. I believe that having explicit goals/strategy, at high level, will help a lot improve the governance processes and their efficiency. Eg. does PieDAO targets to add as many pies as possible? do we prefer to keep the offering short but put more effort into distributing the pies across other networks, L2, etc.? or instead of network presence we prefer to go for more wallet integrations? etc, etc.

Governance supports the decision making and processes that lead towards goals/strategy imo. Some of the questions you outline may be answered by the posts below

Polls have been closed, below the results

Do you agree with dividing proposals into PIP and Generic?

Do you agree with the Gates and Stages as proposed?

Do you agree with Vote types and duration?

Do you agree with the introduction of a forum moderator role?

Thanks for those answers! Was not aware of the last items, missed them from the forum activity, checking them now.