Relaying the proposal from Mike in Discord.

Hey all tried to submit this proposal via Forum but access was denied. Any ideas? Also happy to modify given the current convo.

Adding renBTC to BTC ++ Proposal renBTC is a tokenized representation of BTC on the Ethereum blockchain. It is an ERC20, backed 1:1 with real BTC, and is redeemable at any time for real BTC. renBTC is a product of Ren:

Happy to modify this proposal to meet the team’s requirements and/or satisfy other proposed approaches. This is just an initial submission to get the convo started. Further, RenVM and by virtue renBTC can facilitate a native BTC to BTC ++ on-ramp, so glad to pursue this here or in a separate proposal. 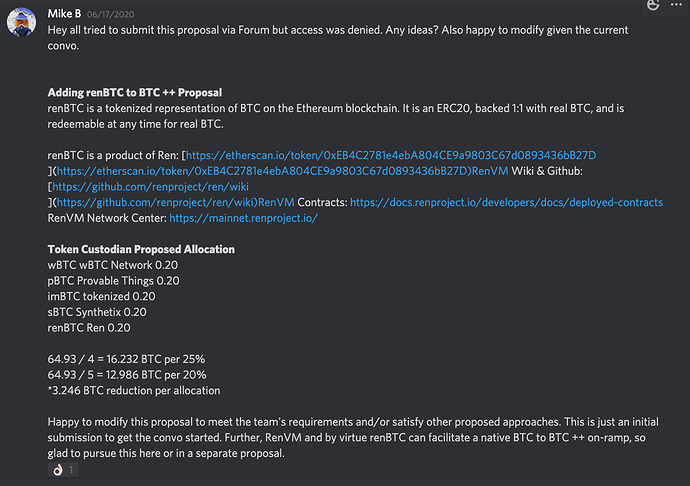 I think that now would be a good time to revisit both the overall goal of BTC++ as well as the allocation of the pie.

Question about the goal of BTC++

What is the goal of BTC++? Is it to minimize risk for BTC++ token holders compared to holding just one form of tokenized BTC? If that is the case, I think the original point made by @mickdegraaf in the original thread still stands and should be re-examined. A personal question that I have is what is the fundamental rationale for using Balancer and having tradable pies, as opposed to having a system closer to that of an index fund? Is the idea to incentivize people to mint BTC++ by offering the Balancer trading fees?

Several people on the Discord have taken issue with the presence of imBTC and pBTC in the BTC++ pool. Some of the reasons highlighted by members include the lack of on-chain liquidity for these tokens and the recency of their deployment. In the following, I will suggest a draft framework for BTC++ allocation.

First, I assume that BTC++ should aim for the following:

From there, I suggest that we should work on a scoring system in the same spirit that what was used for USD++ V2 when considering the allocation of the underlying tokenized representations of BTC. Here are some possible parameters of such scoring system:

I’m not sure about the exact weights yet, although I have a subjective, qualitative preference. We can look at some of the different alternatives of tokenized BTC on that basis.

Synthetic asset overcollateralized at 750% by SNX, a volatile asset as of writing this. To my knowledge, the underlying contract is audited, verified on Etherscan, and the owner is 0x000000. This asset is relatively liquid compared to the BTC++ cap thanks the the sBTC curve pool.

WBTC is a physically backed BTC representation. It is operated by a consortium of industry actors and the supply is auditable on-chain. The Ethereum contracts have been audited a year and a half ago. The token has a relatively long track record of a large value locked without a hack. It requires trust in the consortium, or in the fact that members of the consortium won’t be compelled by authorities to blacklist some addresses. There is a very large liquidity across Ethereum DEXs.

pBTC is a very new token from the Kyber team. It aims to become decentralized in the future, but although audited by one company, the protocol is currently operated by only one node with closed source code and it is not clear to me how to easily verify that the Bitcoin Balance held by the custodian equals that of circulating pBTC. It is also highly illiquid on-chain with only ~39 pBTC in circulation.

imBTC is very new and supported by a fully centralized tokenized BTC provider called Tokenlon. It is supposedly 100% backed by BTC. It is claimed that the imBTC contracts have been audited but no link can be found to such audits. It isn’t clear to me how to verify the underlying BTC reservers.

renBTC is a new entrant that aims to be a decentralized, trustless tokenized BTC solution using a novel sMPC algorithm, a novel sMPC optimized consensus method, a novel P2P networking layer. The renBTC token contracts have been audited, but the clients are still under audit and close source, so there is still quite a lot of trust involved. The BTC backing the tokens can be audited at this Bitcoin address..

Considering all of the above, my subjective and qualitative proposal for allocation would look something like this:

Or maybe we are not comfortable with synthetic assets and we only want physically backed BTC?

If/when pBTC and imBTC get more liquidity / audits / clout, they would be slowly added. Similarly, once TBTC is released and running for at least a few weeks without issue, it would be added in a proportion similar to that of renBTC (but slightly more since it’s fully open source). Months from now when renBTC and tBTC will have been running for a while and are both fully open source, I think it could shift to something like this:

Anyway, this is all very indicative, I just want to start a broader discussion. We should focus on a “proper” scoring rule first.

Discord - A New Way to Chat with Friends & Communities

Discord is the easiest way to communicate over voice, video, and text. Chat, hang out, and stay close with your friends and communities.