Hi all! Working to make my first index for PieDAO. I was told that anyone can be the manager for a new Pie, so someone mentioned an Andre Index on Twitter so I thought I’d try to put something together and we can discuss the best way to do it.

Overview: This doc is exploring what it would look like to have an “Andre Index,” a basket of tokens that somehow track the success of projects by Andre.

Background: Mike Demarais said “i feel like @PieDAO_DeFi or @indexcoop should create an “andre index”” on twitter (link), and PieDAO responded that anyone can manage a new pie

Love the proposal! here’s a spreadsheet that can be used for further modeling

The model includes a max allocation applied to each underlying asset, that can be adjusted as per need (now =50%).

Furtermore, we could also adopt the sentiment score that was previously introduced in our DeFi indices (DEFI+L and rebalanced version of DEFI+S - wip), to weight in for all underlying assets the community shared sentiment according to the 3 following pillars:

Each of the above items was graded on a scale from 1 to 12, and the resulting Sentiment Score for each asset contributed to the definition of a Sentiment Weight.

The final allocation of underlying assets would then be calculated as below:

While an Andre Index sounds interesting, a Yearn index would probably make more sense as everything that Andre does has some relationship to Yearn. A Yearn index could combine everything from $YFI to new recent partnerships/mergers including Cream, Cover, Pickle, etc. Finally, this would help provide an investment vehicle to get exposure to everything from the ever-increasing Yearn ecosystem.

Wow that model is awesome Gabo! Digging in now… lots to process.

I like this idea masonnystrom – and coingecko actually just came out with a Yearn list that we could use as our baseline for which cryptos go into the Pie (I have been loathe to put more effort into this b/c I didn’t know how we would keep up, but using Coingecko as a crutch would help with the research!)

That said, it would miss something like KP3R (until it partners with Yearn I guess).

Also, what about things that are essential to Yearn vaults? Like 3CRV or yUSD? Would that have a place in the yearn pie in your opinion?

Yeah I think the Coingecko list represents a cool baseline for this index, except for the current inclusion of CVP which is not really connected to the others except through meta-governance (same as PieDAO…).
I would swap that with KP3R. Gonna update the model accordingly to serve as a base for further discussions.

Thanks! Agreed, I think this list is now basically good enough to launch once we get the weights down.

Are there some tabs missing in the model? There are a couple items with #REF! errors, including on the sentiment score pieces, which I think keeps it from fully calculating.

The model looks great guys, the latest version of the weights seems sensible and YFI is not dominating too strongly.

In terms of next steps, how are pies usually turned into a reality from this point?

are you also planning to add shishi ,pickle and co ?

As we’ve seen a lot of discussion and buzz about this Pie on discord I’d give it my strong support, and push for YPIE ticker (as long as we get the all clear from the Yearn guys, don’t want to seem like this is a publicity pie)

EDITED:
As I understand it would include:
YFI
SUSHI
COVER
K3PR
CREAM
PICKLE
AKRO

I think the weighting methodology proposed from Gabo is looking really attractive.

Also important to add that the pie will allow metagovernance, giving those interested in governing the Yearn ecosystem an easy way to get involved and raising participation. 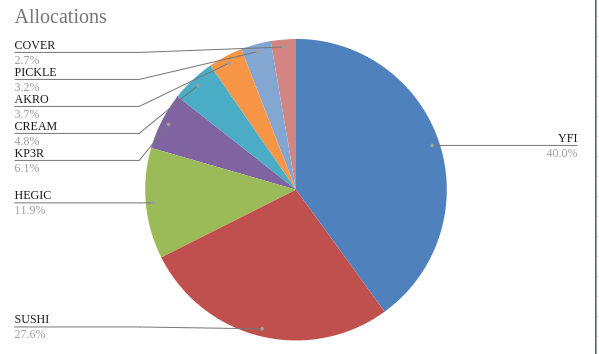 Here some additional details on the proposed index allocation, as you may find in full on the spreadsheet 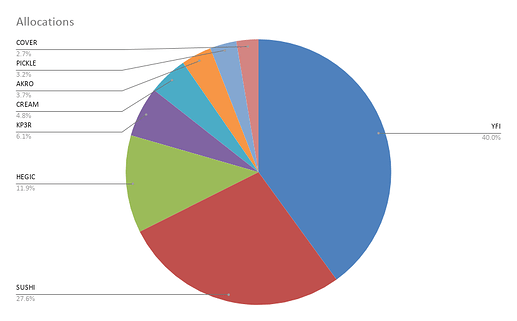 One of the reasons to set a high cap is to provide higher scalability to the Pie also with higher liquidity levels. According to this scenario also the smaller allocations won’t likely represent a bottleneck even supposing the Pie would scale to $100m liquidity.

From an extended risk analysis performed on the period Nov 20th to Dec 4th (i.e. COVER data not available before), it’s evident how the majority of assets presented a very-low to low cross-correlation, while the remainings had a mid-to-low correlation (with the sole exception of the pair COVER-KP3R, scoring 0.8). The uncorrelation of assets is something very sought-after to minimize the portfolio risk, and not so common among crypto-portfolios.

On the other hand, over the (very short) period under analysis, most assets scored a sensibly high standard deviation. Only projects like YFI, HEGIC & SUSHI scored lower values of standard Deviation among the sample, indicating a lower price variance.

Below a visualization of the % risk contribution for each asset of the index, compared to their % allocation. 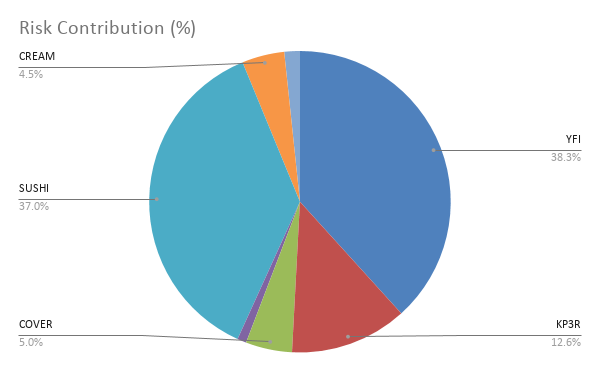 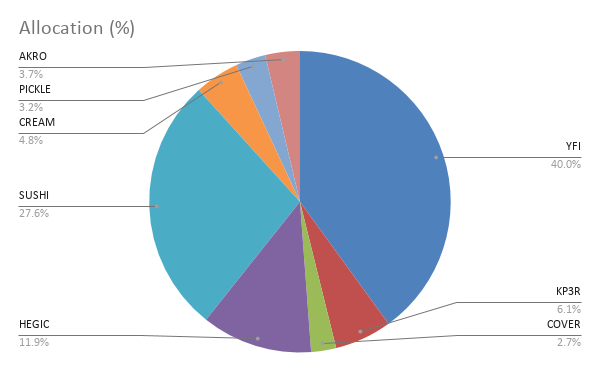 Some risk concentrations can be found around YFI & SUSHI, given both their higher allocation and higher returns scored by SUSHI in the period under analysis.

This picture shows backtesting of the index over the past 15 days, well summarizing the high volatility that occurred during such period. 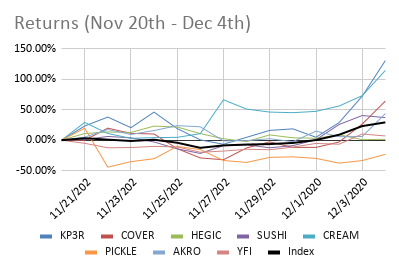 I think HEGIC shouldn’t be included as Sushiswap will be putting out Deriswap for options in the Yearn ecosystem. Could we make a proposal without?

Updated allocation and risk analysis after the exclusion of $HEGIC: 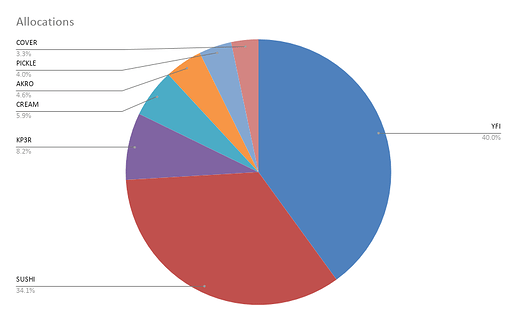 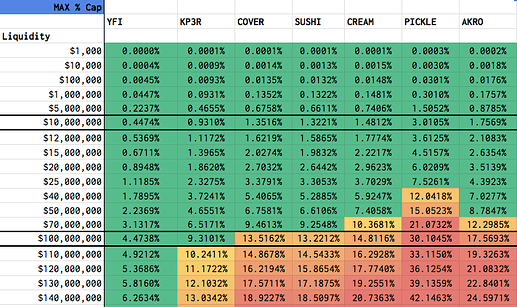 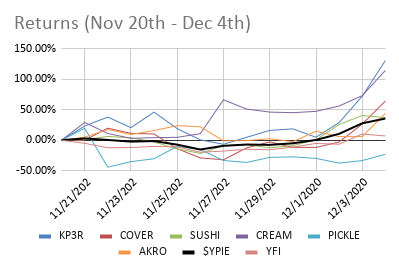 I want to see this created, and am ready to vote

Looking foreword to this. Let’s make it happen!

A new snapshot will be up shortly (block 11407971) to vote on the creation of the $YPIE Yearn Pie pie https://snapshot.page/#/piedao/proposal/QmVT44ymTe2E5K27SaUoM7XisPztmenRgUB1sNbdsZCpiP

Renamed topin and moved to #pip