PieDAO remains one of the most underrated communities and asset management protocols in the space - albeit it being one of the largest. As mentioned in @gabriele’s Inside the Bakery: How We Build Pies publication, PieDAO “employs an open and responsive process for the modeling of its different Pies through discourse.” and rightly so. It is imperative that PieDAO (the protocol) and PieDAO (the community) generate an effective synergy to not only maximize feedback but to welcome & challenge innovative ideas that will propel PieDAO to reach critical mass. This PIP aims to establish a framework towards the construction of a durable and scalable meta-governance foundation per community participation & ownership (progressive decentralization).

How will this be done?

Meta-governance equips $DOUGH token holders with the capability to vote on governance proposals for other protocols. Any & all governance tokens held with the DeFi++ index will be used to vote on the underlying protocol’s proposals. To begin, voting will be enabled for the following protocols: Uniswap, Compound, and AAVE. Depending on the success/participation rate in the aforementioned protocol voting via DeFi++, a proposal will be submitted to expand governance participation to other supported protocols (i.e. YFI, Balancer, SUSHI, MKR).

How will this work?

As the saying goes, “if it ain’t broke, don’t fix it.” This said, PieDAO’s meta-governance methodology could mirror that of Index Coop’s where meta-governance voting is executed via the GovernanceModule in the following format:

What can we expect moving forward?

There are a few efforts that could be formulated:

The idea sounds interesting, and I see Index op has implemented something pretty similar. Do we know what how they benefit from this change and the DAO growth impact of supporting this model?
Also would be intereting to fetch some numbers on the AAVE, Compound,Uniswap on-chain transaction costs monthly average’s to be aware of the expected budget allocation.

imho if duplicated snapshot proposals can be automated, as well as the DAO voting and costs are reasonable I would support it W/o automation just sounds as too much coordination effort for something that the DAO enables through dough holding

After having an extensive conversation with @alexintosh, here are some slight modifications to the proposal along with an extensive elaboration on the overarching vision/rationale/implementation of this proposal:

Unfortunately, there is a technical barrier in utilizing DEFI++ in meta-governance:

The original intent of my proposal was to appoint DEFI++ as the primary metagovernance asset since the underlying tokens are DEFI+L and DEFI+S. With this, DEFI++ offers a near-total opportunity to participate in myriad governance practices.

What is the added value to DOUGH holders for voting on governance proposals which do not directly or indirectly affect PieDAO?

I fail to see the net positive on spending time and $9000,- a month to participate in governance of other DAOs.

Thanks for putting this together!

I would support this, maybe optimizing through a more agile structure of MetaGovernance committee (e.g. 3 community members?), to also streamline its coordination.

First let me state that I think having meta-governance is a good idea in general. I feel that providing additional utility to DOUGH and taking advantage of the tokens held by the protocol behind the indexes is a step in the right direction.

I am a bit more divided about the process of setting up a committee right now to implement this. This seems like a fairly large amount of time and money to spend on something that might have a limited impact on platform adoption (which is what is needed right now) and for which the interest from current DOUGH holders remains to be shown. In case interest is low, the quorum would almost never be met and we’d be spending all that time and money just to have the committee vote on proposals that probably don’t affect PieDAO.

But maybe I’m mistaken and I’d be glad to be shown wrong. How about setting up a couple of trial meta-governance votes before implementing a permanent system ? That could be used to measure the interest and involvement of the DOUGH holders and estimate what kind of participation would be expected for subsequent meta-governance votes.

An additional line of thought concerning meta-governance: This is probably a bit ambitious for now but I think a good long-term direction for it would be to take inspiration from what Convex is currently implementing. They control a lot of voting power for Curve via the veCRV they have locked and they are on the verge of having that voting power controlled by holders of their own CVX token. I am not sure how that will be implemented exactly, but it seems like it will be more automatized than the way Index Coop implements meta-governance via a committee. Additionally, a protocol is being built on top of this (see Votium: https://votiumprotocol.medium.com/introducing-the-votium-protocol-e2e21c71f036) to auction the CVX voting power to the highest bidders, giving additional value to the token (especially for holders that don’t really care about voting). While having a committee may be the right direction in the short-term, going in that direction may bring a lot more value to DOUGH and the voting power given to it by the various tokens held by the protocol.

I assume that this last minute change will invalidate the current proposal on Snapshot, correct?

Also, how were these community members picked? Would be good to briefly state motivation of how these members made it into the initial committee, just to avoid conflict of interest, especially since there is a direct financial gain attached to these positions.

In conclusion, I’d side with @mickdegraaf at the moment, as I also don’t see the reason to spend $9k for something with very little actual benefit to DOUGH holders or the ecosystem right now. Maybe if there was a vesting period attached to the compensation, or the scope of support extended to also be including a different committee to further flesh out participation in other aspects of the ecosystem, and not just voting, it could be argued imho.

For now, will wait how this develops :))

Thanks @Guzman_MassAdoption for a well prepared proposal and follow through.

I will address everything in the replied order.

The value add/proposition is to unlock & enable governance participation amongst the underlying protocols (e.g. DEFI+L - UNI,AAVE,COMP, etc. | DEFI+S - BAL,UMA, etc.). The intention of this proposal is to expand beyond monetary attributes; instating token holder ownership via the engagement DOUGH holders (similar to how Index Coop operates the INDEX token).

Regarding committee compensation, I agree to an extent in which the committee membership could be reduced to approximately 3 individuals (as suggested by @gabo) . This would significantly reducing overhead scope.

As of now there has been a lack of intrigue/curiosity by the PieDAO community in pursuing governance exercises. To some extent, PieDAO has lagged behind Index Coop on this front. Pertaining to the significance/relevance of a committee, I think it’s pertinent now more than ever. Via this committee, it can serve as a catalyst to stimulate DOUGH holder participation (similar to how the DeFi Education Fund was the revitalizer for UNI governance) - to this end we are in complete agreement that interest from DOUGH holders remains to be shown. However, if the last PieDAO Metagovernance poll exhibits anything, is that there is indeed community support regarding this engagement. To your latter point, I believe that the recent DOUGH Staking & Governance Mining proposal acts as a potential solution.

That is correct, the previous Snapshot is invalid with the current modifications. However, it does serve as an interesting sentiment check; over 502.08K DOUGH voting IN FAVOR. Regarding the $9k compensation, I absolutely agree so I’ve gone ahead and consolidated the committee membership to 3 members (see my comment to @mickdegraaf’s reply).

I have held ongoing discussions with the PieDAO team and, to my understanding, we are all supportive and in agreement for the proposed initiative. Personally, I’m really excited to see this further deliberated upon and potentially out in the wild sometime soon.

Thanks @Guzman_MassAdoption for the reply.

My first question was more about what goals will the committee’s votes pursue rather than what proposals will you vote on. In my prior post I put forth a tiny example with a conflict that is not clear which direction the committee should vote. I was hoping to understand what objectives would guide the committee’s votes.

I think as part of this initiative some sort of voting policy should be prepared, so that the DAO community provides overall direction on where the votes should go in the case that quorum is not reached on the snapshot.

@saganaki seems the benefit of all this effort can be split into Increase DAOs Synergy and Amplify PieDAO members voice across the ecosystem. Although I’m a big fan of processes and frameworks, that would limit the Dough holders freedom to extend their voice to other DAOs, and it is up to every person to make up their minds on the subject in question — and the committee should not be judging but enabling.

Hi @Adrian.A, not sure what you mean by “[processes and frameworks] would limit the Dough holders freedom to extend their voice…”.

My suggestion is for there to be clear directions on where the Meta-Governance Committee should vote when there is no quorum on snapshots. This allows two things:

@saganaki got it. Missed the point you were focusing only over situations where quorum is not reached.

So we may have 3 main processes to be setup: 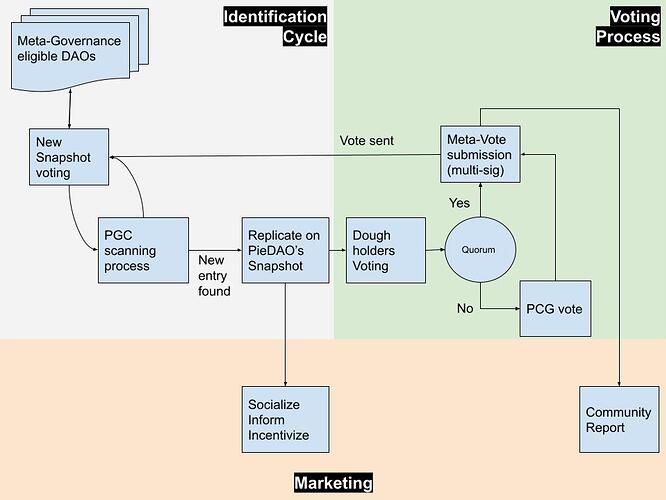 Considering 3 resources are expected to be allocated, a clear RACI matrix should be designed to define ownership while assuring resiliency.

Sorry for the belated response @Guzman_MassAdoption, and thanks for the follow-up! Looking forward to seeing how this develops!

Quick proposal to build an MVP version of the meta-gov initiative.

Love this MVP proposal and think we should pursue it ASAP.

The beauty of this proposal is that it will put into practice the use of veDOUGH in which tokenholders will/could still be staked & earning all the while delegating their veDOUGH to the multisig for governance purposes. A win-win in my opinion!

Perhaps this could be escalated to a Snapshot vote to gauge community sentiment?

Can voting delegation get set for more than a single account?

What do you mean?

About this comment ‘‘Delegate voting power to a friendly EOA address’’, sounds like a single point of failure, and I’m not that familiar with the vote delegation mechanism