Disclaimer: First proposal so if there is anything not conform please let me know.

CONTEXT
On this snapshot, there was a really close vote for the minimum distribution regarding the treasury farming. 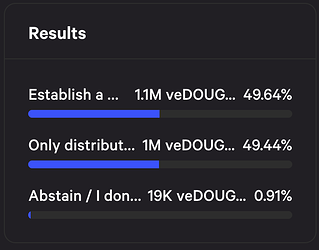 Discussion about that snapshot can be found here:

The downside to that decision is that we need to repay the advances from the negative month when we have really good month like in the month of March. The treasury committee also need to do their best to manage the treasury lost during the down months and decided to keep a portion of it for future distribution as explained in that post.
Link to the message in Discord. 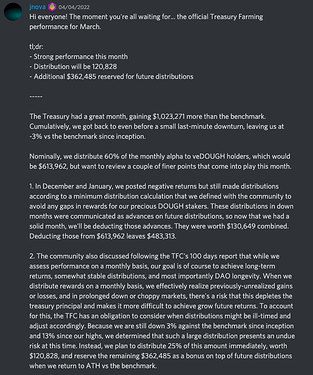 PURPOSE
My intention in this post is to see if the community still stand behind the previous vote of giving a minimum distribution.

PROPOSAL
To remove the minimum distribution and only distribute in the up months.

Thanks for the proposal, for a first one it’s a clear one.

I’m just missing the poll so that the community votes on it.

Done. Thanks for the feedback. Was looking for it but didn’t find it.

Wasn’t around in the previous vote so curious what the arguments were for a minimum then. On the surface makes sense to me to only distribute when there is a surplus, simple reason that every $1 of principal distributed represents a lifetime reduction in returns.

Seems that the proposal is straightforward, no additional detail needed !

Question on governance though would be : how often could we revote the same subject ?

Thanks for the input Jamie. Personally, I am opposed to putting any maximum because even though it can maybe be myopic in ones view, I think it just makes sense that the rewards go to the people that staked to earn those rewards instead of being distributed to future veDOUGH holders. What if we put a limit and then 3 or even 6 months in a row ETH goes to the moon and we limit the veDOUGH holders for believing in the project. We will then have to vote what to do with those surplus and chances are when they will be distributed, it will be diluted with a bunch of newcomers.

From my understanding, there is already a mechanism to grow the capital and I think it is perfect as is. My view is to make it as simple as possible and that would be to distribute what was gained during the current month and not put any interference with anything up or down about it.

I appreciate you taking the time to put together a proposal and vote, Peddypeddler. I’m not sure what frequency we should revisit/revote topics in general. But I can say that, in this case, the time feels right to revisit this matter, in the light of more experience/data, and this is not bureaucracy gone mad.

I voted for a minimum distribution, last time, because three years is a LONG time to lock up liquidity. Since I (and most others) locked, the DOUGH price has gone from, what $0.80 to $0.20? Down 75%. Sure, crypto goes up, crypto goes down. Mainly down, recently, market-wide. But it’s difficult to watch my DOUGH position crawl toward zero, as it seems to be doing, and be unable to do anything about it due to the lock.

The monthly distribution is the main hedge against that. So a minimum seemed a good idea at the time.

But I can see now that it’s created this peculiar situation for the Treasury committee to manage, where they’re having to take a view on timing the market about when to issue SLICE. This involves a lot of judgement. Now, I trust their judgement. But the centralisation and trust required don’t sit well with me in the crypto space. It feels a bit nanny state? I’d prefer something radically simple, totally transparent and strictly rules-based.

If the only other proposal, beyond the current system, is no minimum distribution, and full distribution in up months, I’ll vote for that.

(PS a maximum distribution doesn’t make sense to me)

Thanks Pharkie for the input. I think I agree with everything you said especially with the “radically simple, totally transparent and striclty rules-based”. As for the frequency, I have no idea.

I also feel for the price drop of DOUGH. I looked into a few buyback options like buy-back and burn and buyback and make but I do not feel comfortable enough in the subject to bring the matter forward yet as I am still educating myself on the subject.

I do support the distribution only on up months. IMO distributing when there’s no money is basically taking a loan that will need to be repaid, and that is a risky situation that, in a catastrophic scenario, could lead to damage the treasury health.

Thanks for your proposal @peddypeddler and to everyone joining the discussion.
My take on the subject is:

I believe it’s a priority to deliver, in the near future, version 2 of the Treasury Committee which includes the mandate and the internal governance of the Committee. It’s likely to be more effective as a set of changes voted in a bundle and I would suggest deeper discussion around that instead of changing single rules on the go.

As for distribution, I think the current setup fits the bill and the next iteration should focus a lot more on farming and limit discretionary strategies from the committee limited to a percentage of the entire treasury, by doing so there should be in principle always positive months (unless hack/rug happens) as far as we do the accounting of ETH Farming in ETH and Stables in stables.