In July 2021 PieDAO established a Treasury Committee to actively manage and grow the assets available in the PieDAO Treasury, including

This document aims to recap the main activities pursued, and decisions taken by the Committee so far, to further increase the visibility of the DAO into its existing and future operations.

Two investment memos/updates have been circulated during the course of the first ∼100 days of the Committee existence:

The Treasury Committee has been gathering on a weekly basis to discuss progress and review the ongoing investments. Detailed notes for each Committee session as well as the documents, presentations and thesis discussed during the meetings are available here.

A series of Treasury Farming Reports have also been shared with the DAO on a monthly basis starting in August to outline the performance of the committee. Here is a link to the first issue and others can be found in the Inside The Bakery substack.

The overall idea was to diversify the treasury (introducing a portion of stablecoin) and put it into a farmable state.

Following the initialization in July ‘21, the Committee’s activity has known two phases, with different risk tolerances in response to the evolving market outlook.

Phase I - July to August ‘21 - Protection and consolidation

The goal has been to protect the treasury’s principal from potential further market downside (following the price action in May-June) and to focus on yield farming. This included maintaining a portion of the treasury in stablecoin as per the “t0” allocation and not taking leveraged positions.

Some of the farming strategies we pursued were:

Following the August closure, the Committee decided to increase the risk profile and gradually increase its ETH-long position. This was done by departing from the “t0” allocation, by reducing the amount of stables held and creating a weekly accumulation plan based on RAI, which was selected for a) its decentralization and b) its negligible borrowing interests. The current plan includes borrowing approx. $500k/week worth of RAI (on AAVE), then converting them on ETH. The Committee aims to achieve a target leverage of 1.2-1.4x which is reckoned to be sufficiently safe and able to absorb temporary market pullbacks.

On top of the leveraged DCA strategy the Committee continues to pursue yield farming activities, with the cvxCRV/ other Convex strategies, OHM staking, and with Ribbon call selling on ETH and WBTC.

The Committee will continue to monitor the market and update the strategy/ risk posture accordingly. Key decisions to be taken in the foreseeable future will include:

As soon as the Committee was established, a Performance Tracking tool was created to keep track of its results. Initially the tool has been configured to measure the Committee’s impact vs. the “t0” allocation. In November, the tool was expanded to include alpha tracking vs. the “t-1” allocation too.

A snapshot of the two views is reported below, updated to November 15th, 2021. 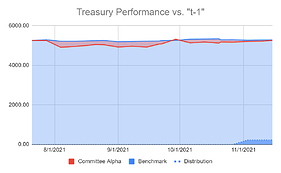 The starting value of the treasury, expressed in ETH, was equal to 5254 ETH.

As of November 15th, 2021, the treasury contains 5037 ETH. If we include the first distribution already sent to the stakers in November (equal to 223 ETH), this equals to a level approx. 5300 ETH, which can be used to measure the performance of the Committee.

Measured against the value that the “t0” would have today (4824 ETH), the Committee generated about 436 ETH (or approx $2M) in alpha. The value of the “t0” allocation would indeed have shrunk in ETH terms, due to the presence of a portion of stablecoins in the context of rising ETH prices. The Committee rebalanced the allocation over time increasing its long exposure and generated a positive increment vs. the benchmark. This increment was also taken as a reference point to define the first distribution to the stakers, which in the end amounted to 223 ETH as previously mentioned.

Measured against the value that the “t-1” would have today (5280 ETH), the Committee’s action was about neutral, and generated only a small profit of 20 ETH (or approx. $100k) above the benchmark closing at a total of 5300 ETH. A full-crypto exposure would have indeed done well over the first 100 days since the Committee was established - better than the allocation decided, even if that would have cost more volatility and significantly more exposure to possible downsides.

A discussion is ongoing among the Committee’s members on what methodology to use to track the performance in a way that better preserves the interests of the DAO and it is long term oriented.

Case for establishing a distribution baseline for stakers

The first farming rewards distribution to the stakers took place in the first week of November 2021 and served as a testbed to measure various mechanisms of distribution. These included selecting the assets to be liquidated and the operations involved with packaging the SLICE rewards.

An additional learning/ consideration came out of this process, regarding more specifically the entity of funds to be distributed. The initial position was to use the monthly “alpha vs. benchmark” figure discussed above to work out the amount of rewards to be sent. The idea is indeed to send out extra yield to the veDOUGH holders without depleting the treasury’s principal.

Going though the first distribution process, however, made the Committee realize a few challenges related to this:

These reasons make the Treasury Committee believe it would be advisable to introduce a “minimum distribution baseline” to be sent to the stakers as a monthly basis. For example, based on the recent distribution (223 ETH for the first 3 months, equivalent to 74 ETH/mo.) the minimum baseline could be in the ballpark of 40-50% of this figure i.e. something like 30-35 ETH/mo. This would represent an “advance” of the Committee to the stakers in case distribution < alpha, but would help regularize the distribution profile over time. Also, the Committee should review the accumulated balance of the rewards distributed and adjust the outflow to make sure in the long term this matches the net alpha generated by the Committee.

Questions the Committee is posing to the community (votes to follow)

If a minimum distribution is like an advance should months >alpha have reduced payout to factor in the advance?

When long term strategies pay off, it won’t all go to the stakers and replenish the treasury during lean times.

Yes that’s right. If the community votes to implement a minimum distribution then months in which the treasury performance would not generate enough alpha to support the minimum, the minimum will be paid and deducted from future distributions at the committee’s discretion. Though there will be less principal from which to generate those future distributions, making it a bit harder to pay off the advance.

That’s a good point, as much as it hurts my own plans I feel like I should side on biting the bullet on tight months (no minimum distribution) to keep the principal going.

Alpha measuring is way outside my wheelhouse but how about beating just holding BCP? Like how a lot of people’s benchmark is to beat the S&P?

I’d be in favor of the benchmark being either