Ways to Improve the Tokenomics of DOUGH

This document was created to start a conversation about how to improve DOUGH tokenomics in a way that tries to offset the residual DOUGH selling pressure on the market that was outlined elsewhere.

The goal was not to apply a dampening effect to this sell pressure (eg: lowering incentives and similar), but to create an upward price pressure through novel mechanisms.

After reading through some forum posts and the reports my theory is that the core problem we have is that there is a steady rate of DOUGH emissions from the treasury that doesn’t have sinks for DOUGH holders with all risk profiles and time horizons This diagram outlines what (my assumptions) the average DOUGH holder is thinking: 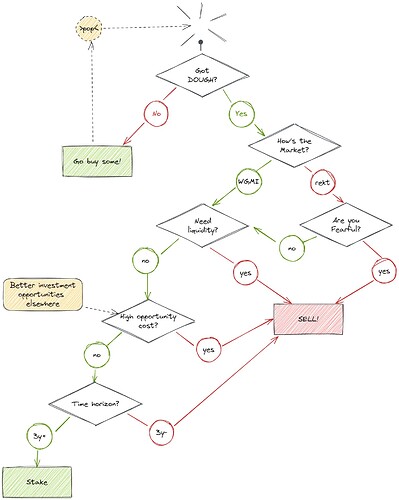 There is a lot going on in this diagram, so let’s take a look at each of them. I’m gonna put all these into two groups: things we can influence and things we can work around:

This is something that we can’t influence. It is a given and it is also highly subjective. If fear overcomes somebody they will sell, there is no way around that. We have a mechanism though that we can deploy to work around the price impact that selling causes, more on this later.

Let’s say that our investor is either not fearful, or we’re in a bull market and they get some DOUGH (LP incentives for example). The next question is whether they need liquidity or not. This is a huge problem for those DAOs that have full time contributors who are paid in the DAOs own tokens. There are living expenses, bills to be paid, so the token ends up in the order book. This is also a given, we can’t influence it, but it can be worked around.

Now if our investor doesn’t need liquidity, and all is well, there is still the looming question of “Can I deploy my capital elsewhere for better efficiency?”. This is something that we can directly influence. If one gets more $$$ for their staked veDOUGH they will have less incentives to either unstake or not stake at all.

This is a tricky one. 3 years in the crypto space is an eternity, but in order to maximize staking returns one needs to stake their DOUGH for 3 years. I think this is a tough call for many DOUGH holders and it can easily lead to people selling their DOUGH after getting it.

I think this is a similar problem that Curve has with their locking which got worked around by Convex with crvCVX. The problem though is that veDOUGH can’t be used as DeFi Lego.

It can be seen from the flowchart that there are many bumps in the road that would lead to the selling of DOUGH. Most of these are outside of our influence, and the ones we can influence (I think) are already in a good shape, so let’s take a look at some “sinks” that we can add for DOUGH in order to solve the core problem. I will go from top to bottom

The market is imploding, there is blood on the streets. You tried to hold onto your DOUGH but the IRS is on your doorstep and your bills are piling up. You decide to sell.

How this usually works is that you go to Uniswap / SUSHI / what have you, click a button and your DOUGH is >poof< and the market price goes >plop<. This is something we don’t want. Fortunately there is a solution: buyback!

This was inspired by the Inverse Bonding feature of Olympus.

How this would work is that instead of selling your DOUGH you can decide to give it back to the treasury. To incentivize people to use this feature we can also offer them a small premium (0.5% over market price for example). In this case the DOUGH goes back to the treasury and the user gets other treasury assets in return.

I don’t know about the cash flow of the treasury so this might not work at all, but if it does, it is great.

What this mechanism does is that it takes DOUGH out of circulation, so the float will drop which applies an upward price pressure. The cost is that the treasury shrinks.

The Oven may be used when DOUGH is redeemed for treasury assets further incentivizing the use of this mechanism.

There is a case when everything is fine, but you need liquidity for some reason. If you believe that DOUGH will either stay at this price level or will go up you can opt to use it as collateral for a loan. Right now we can’t do this but there are many options to choose from if we want to do this. My favorite is Maker DAO.

You can read more about their collateral onboarding process here.

How this works is that you take your DOUGH, create a CDP (Collaterized Debt Position) and you get Dai in return. You’ll have to repay this at some point, but the APR is usually low.

Note that using DOUGH as collateral is not the perfect idea, as it is not a yield-bearing asset.

An even better idea is not to use DOUGH directly, but use the LP tokens from a DOUGH pool as collateral! This, for example uses a Uniswap Dai/USDC pool’s tokens as collateral.

Alternatively we can onboard DOUGH to AAVE or some other lending platform that can give us this feature.

This (I think) is something that’s not a significant problem right now, but it is worth keeping an eye on.

If we implement the treasury swap method, then those people who want to sell because they don’t want to lock can use it which will solve the sell pressure problem.

The following ideas are unorthodox, I have no idea whether they would work, but they might be good brainstorming material.

Oh No, I’ve Burned my DOUGH!

The introduction of a burn mechanism can also route some DOUGH into the oven. This would be the opposite of what $ASH is doing: we could allow the user to burn DOUGH to receive novel items, like

Your Coin is Not Accepted

In case we end up building some applications in the future that we want to sell (an investing-helper app maybe?

) we can have users pay DOUGH to get access to it.

It can work in a way that you pay DOUGH, and get an NFT back that represents your subscription which then can be renewed (yearly maybe)

We’ve covered a lot of ground and I think this writeup can serve as a basis for a more fleshed-out proposal that has the potential of improving the DOUGH tokenomics. What are your thoughts on this?

Special thanks to @50shadesofgwei for all the input.

The diagram is actually an excellent way to visualise what must be a common thought process. FOMO is a hard one.

Speaking personally I have this constant dilemma in DeFi where I feel overwhelmed by choice. Just within PieDAO the questions might be:

Something else to consider is whether more utility can be derived from the core governance tokens. This seems to be a recurring problem that all DAOs are facing, but IMO the veDOUGH model has proven that this DAO can pull off more sophisticated tokenomics and keep a core group of contributors engaged. What else can we do:

*This somewhat suffers from a boolean problem: 1 unit of veDOUGH grants the same access to, say, Auxo as 1m tokens.

This is a really stimulating post, full of ideas and considerations. Thanks for the analysis and ideation

It seems that as long as the DAO continues to do payouts in DOUGH the price will fall. People paid in DOUGH will cash out for living expenses, many reward recipients are not reinvesting it, and very few are buying it rn. Nothing is applying upward pressure.

[This is also happening to other investment DAOs, like Idle.Finance, which imo is a really good club. Their token was once up to $30. It had a peak with the market in Sept 21 at $9.65. Since then it has dropped to $0.54 today. The Idle chart shows the same scooping decline as DOUGH.]

What about doing payouts in other tokens? Where users don’t get paid or rewarded in DOUGH, but in a volatile or stablecoin. I suppose that would gradually deplete the treasury.

Why don’t we do payouts in Pies? This is already happening for veDOUGH stakers who are getting rewarded in $PLAY. This is a unique advantage that only PieDAO has (or other indice makers).

When users receive a slice of Pie, its value is determined by the price of the underlying assets. Selling Pie tokens doesn’t exert any permanent selling pressure on the Pie itself because its value is external.

Some payout recipients will just keep the Pie. Most importantly, people cashing out the Pie for liquidity will not suppress the DOUGH price. Would this be economically viable?

I wouldn’t be opposed to experimenting with the burn mechanics. Ie: rather than the current 60/25/15 split for distributions, there could be a 5% allocation for buying and burning tokens.

Speaking personally I have this constant dilemma in DeFi where I feel overwhelmed by choice.

I also have this problem…and there are also a lot of NFT projects that might explode (or not).

People paid in DOUGH will cash out for living expenses

Using DOUGH as collateral for a loan would help alleviate this problem, although doing this is still risky because of the possible liquidation if DOUGH price drops.

Would it be possible to have our own lending mechanism that would lend treasury assets (stablecoins?) using DOUGH as collateral?

many reward recipients are not reinvesting it, and very few are buying it rn.

This is not a problem though as rewards are paid in pies, right?

Nothing is applying upward pressure.

I had a talk with @alexintosh about this and he mentioned that having great products will apply an upward pressure. Maybe we can combine the two. Having people pay in DOUGH for our products.

. What do you think about this?

Can we calculate the price impact - given the historical data - of that 5% burn rate? I’d rather have a buyback mechanism instead of a burn mechanism though. Or maybe a combined burn - buyback. So 2.5% is burned 2.5% goes back to the treasury.

Maybe we can combine the two. Having people pay in DOUGH for our products.

Reminds me of Putin insisting that countries pay for oil in Rubles. It worked, the Ruble went up

But joking aside, Single Asset Entry is a UX aspect we should preserve: IF a user wants to buy some Pie, THEN any of the underlying assets can be used, or a major asset like Ether. The contract takes care of the allocations.

In this way we could offer a discount (5%?) for buyers that enter with DOUGH. This would be a benefit for DAO members who have a stack of DOUGH. But if it’s financially advantageous for all, then outsiders would purchase DOUGH, and that would apply upwards pressure on the DOUGH price.

(Maybe the contract balancing would cancel that out though, not sure how those swaps work.)